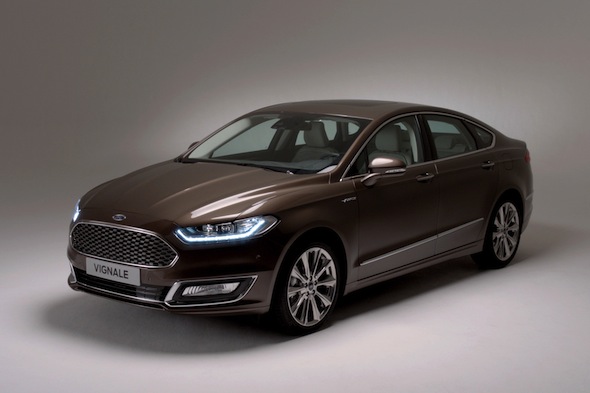 Ford has lifted the covers off its new, upmarket Mondeo Vignale.
The new model, which is available in both saloon and estate guises, is the first in Ford's brand-new Vignale range, which aims to offer customers a more luxurious ownership experience.

Starting from £29,045, the Mondeo Vignale is based on the previously top-level Titanium X trim, but includes a number of features, which would traditionally be the preserve of its posh German rivals. The front seats are equipped with a massaging function, there is greater use of leather and soft-touch plastics in the cabin, and diesel models are fitted with active noise cancellation technology.

The exterior has also been restyled to distance the Vignale from lesser models in the range. The standard front grille is replaced with a hexagonal patterned item, while there is greater use of chrome trim detailing, particularly around the door mirrors and along the car's flanks. 18-inch alloy wheels and metallic paint are offered as standard.

Inside, the Vignale gets the full complement of Ford's entertainment and safety technology, including its Sync2 media system, park assist, a rear view camera, city braking, adapative LED headlights and traffic sign recognition. An upgraded Sony stereo, complete with 12 speakers, is also fitted.


The Mondeo Vignale is available in petrol, diesel and hybrid guises. The 2.0-litre diesel, which comes in 178bhp and 207bhp states of tune, is likely to be the UK bestseller, though those after more performance should consider the 237bhp 2.0-litre Ecoboost petrol.

The hybrid, which is only available as a saloon, mates a 2.0-litre petrol engine to an electric motor for tax-free CO2 emissions of 99g/km.

It's not just the car itself that has gone upmarket, as Ford wants Vignale to signify a more premium ownership experience, starting the fist time a customer sets foot in a showroom. 54 new 'FordStores' are to open in the country's largest dealerships, where Vignale buyers will be able to choose from extensive personalisation options, make use of a personal relationship manager (no, not that sort) and a 24-hour customer service line.

The Vignale range will grow in the near future with the introduction of an upmarket version of the S-Max people carrier due to be unveiled later this year. Smaller models such as the Focus and Fiesta, are unlikely to get the same upmarket makeover, however.

Order books for the Mondeo Vignale open in May, with the first customer deliveries expected late this summer.

Would you consider a the Vignale over an Audi A4 or Mercedes C-Class? Let us know in the comments section below.
Tags
Read Full Story