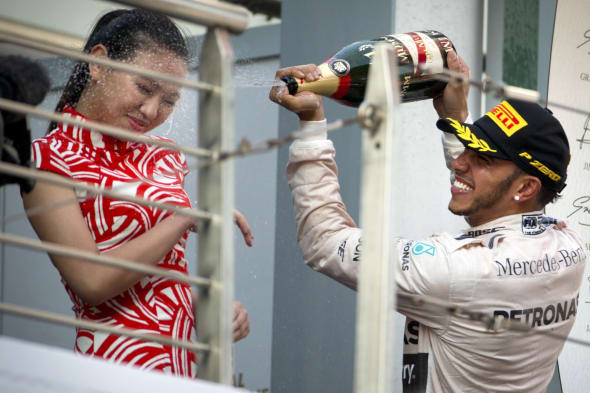 Last years' F1 world champion, Lewis Hamilton, has come under attack from sexism groups after spraying champagne in the face of a hostess at the Chinese Grand Prix over the weekend.
Hamilton, who has won two of the three races so far in the 2015 F1 calendar is known for this 'trademark' move. However, Object, a group which fights against sexism, has called for him to apologise after shocking the woman who he sprayed with champagne after his victory, calling his actions "selfish and inconsiderate".

Condemning the driver's behaviour in front of a huge global audience, Object has stated that the 30-year-old should be forced to apologise for "specially directing" the alcohol into the woman's face, reports the Daily Mail.

Chief executive of Object, Roz Hardie said: "The photographs appear to show that the woman is not just being splashed, but that the champagne is being very specifically directed into her face, which does not look like a voluntary piece of horseplay on her part.

"If this if the case we think Lewis Hamilton should apologise for his actions and think carefully about how he behaves in the future. For most people, it would be apparent that she is not enjoying it.

"It is surely a very difficult position to be a grid girl and she would have had little option but to stand there and take it. That is something of which he should be aware. But instead, he appears to have abused her position."

Hardie continued to say that sexism is entrenched in motorsport, urging those in the industry to "be respectful to these women."

Having won two of the three races in the F1 calendar so far, Hamilton looks on track to replicate his championship win last year. However, there is already animosity between Hamilton and teammate Nico Rosberg, who has accused the driver of putting him under undue pressure from Ferrari driver Sebastian Vettel, after driving slowly to protect his tyres.
Tags
Read Full Story