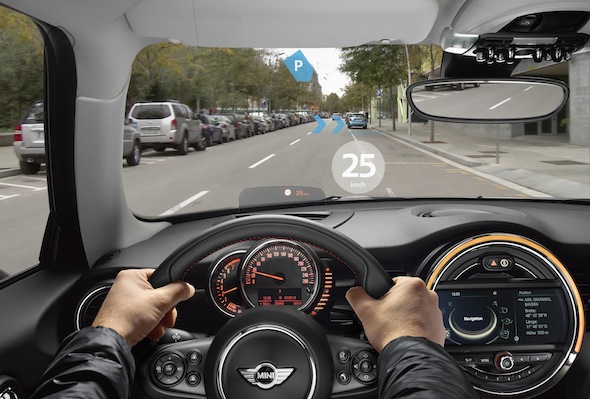 Mini has revealed a new wearable technology concept, in the form of augmented reality glasses, ahead of next week's Shanghai motor show.
The glasses - which to our eyes look like a set of welder's goggles – are said to be in the working prototype stage, and will offer drivers a number of handy features, aimed at making their journeys safer and more enjoyable.

Highlights of the glasses' functionality includes wearers being able to input sat nav entries while outside the vehicle, and then having them automatically transferred to the car's sat nav upon entry.

Parking would also be made a whole lot easier, with the glasses able to display feeds from vehicles fitted with rear-view cameras, meaning no more kerbed wheels.

The glasses can also be used while driving as a head-up display, which can show speed, sat nav instructions and other information, as displayed in the picture above.


"We have created an interlinked system and augmented reality eyewear with a characteristic Mini design that revolutionise the experience both in and outside the vehicle. This prototype with its customised, interactive functions succeeds in fusing augmented reality with the brand's trademark sense of lifestyle."

However, had Glass made it into production, it would have fallen foul of a number of laws relating to the use of such technology while driving. The UK for instance, had already banned their use behind the wheel, and it's expected that Mini's glasses will meet a similar fate, particularly as the prototype displays text messages and other phone information while driving.

Other manufacturers experimenting with augmented reality technology include Jaguar Land Rover, with its 'invisible bonnet' and virtual windscreen.

Would you use augmented reality technology while driving? Have your say in the comments section below.
Tags
Read Full Story Click here to comment