Audi win thrilling 6 Hours of Silverstone by seconds from Porsche 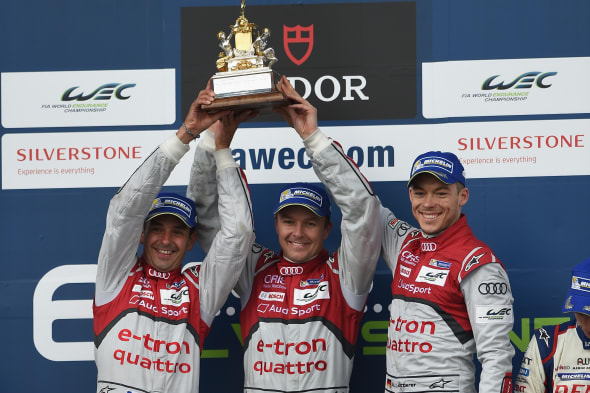 Andre Lotterer was the hero for Audi Sport after a stunning drive in the 6 Hours of Silverstone handed the team victory in the opening race of the World Endurance Championship.

The German driver put in a superb triple stint when his average lap times never exceeded more than 1m43s to give the #7 R18 e-tron quattro a commanding lead before handing over to Marcel Fassler.

However, it nearly all went wrong when Fassler was given a stop-go penalty for an overtaking infringement which set up a thrilling climax as Audi triumphed after six hours and 201 laps by a mere 4.6 seconds from Porsche's one remaining 919 Hybrid brought home by Neel Jani. Third was the #1 Toyota TS040 of defending WEC champions Anthony Davidson, Sebastien Buemi and Kazuki Nakajima.

The victory demonstrated how the Silverstone circuit suited the new and improved Audi e-tron quattro, as Lotterer told AOL Cars before the race.

However, in the early stages it looked as though Porsche would prove the stronger. Pole winner Mark Webber held onto the lead at the green flag whilst behind him the second Porsche 919 Hybrid immediately came under pressure from the lead Audi R18 e-tron quattro of Lucas di Grassi.

But di Grassi quickly lost the place to Buemi who capitalised on the two cars ahead concentrating on each other and nipped through to take third. 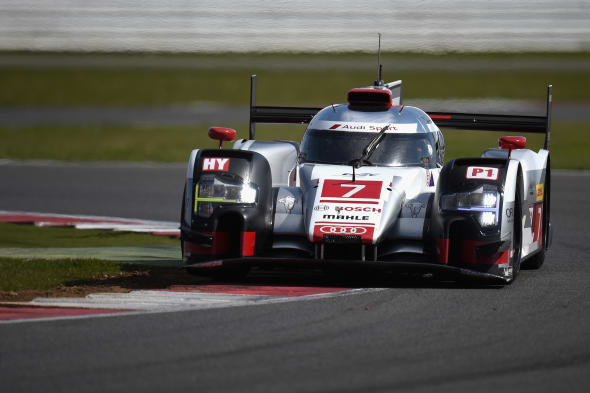 Porsche were in control for the first hour with Webber at one point extending his lead to four seconds before traffic slowed him down. He managed to extend it again though to more than eight seconds before the LMP2 #36 Signatech-Alpine car driven by Pierre Chatin crashed into the barriers at Copse 40 minutes into the race.

That brought a round of pitstops including Webber who stayed in the #17 Porsche after pitting and kept his lead.

Twenty minutes later another full course yellow was called to repair the barriers at Copse and when the race went green again, Benoit Treluyer nipped into third behind the two Porsches past Buemi who was caught napping.

Porsche were soon down to just the one LMP1 car though when Webber pitted again 1h20m into the race and was immediately wheeled into the garage to retire with drivetrain problems.

Marc Lieb inherited the lead but Alexander Wurz, who took advantage of the yellow flag period to pit for fuel, took over when the LMP1 rivals came in for the second pits after the race restarted and as the two-hour mark neared, he had a 10s lead from Jani who had taken over the #18 Porsche.

Jani was having an entertaining battle with Fassler who had taken over the #7 Audi from Treluyer, losing and then regaining second place before moving into the lead when Wurz pitted his #2 Toyota TS040 Hybrid just after two hours to hand over to Mike Conway.

Behind them, Davidson was on a charge at the wheel of the #1 Toyota and moved to within 5s of the lead. He then pitted for fuel only - double stinting his tyres - and after rejoining the race overtook Conway for second before finding himself in the lead when Dumas made an error and went wide after taking over from Lieb.

Conway lost time when some debris wedged itself under his front splitter got wedged forcing him to pit. Lotterer had already overtaken him for second and the unscheduled pit stop put the Toyota down to fourth. Lotterer meanwhile had his sights on the lead and on fresher tyres began to hunt Davidson down and as the 6 Hours of Silverstone reached halfway and 96 laps completed, Lotterer overtook Davidson at Village.

The Briton was then passed by Duval who was unlapping the #8 Audi but more importantly was now acting as a buffer to protect the new leader.

The pendulum swung Audi's way over the next 90 minutes with Lotterer's triple stint and kept the rest of the field comfortably at arm's length. The German took control when he stopped only for fuel at the next round of stops with Lieb and Kazuki Nakajima, who was now in the #1 TS040, unable to make any inroads into his 30s lead.

By the end of the hour, Lotterer's lead was 38s and although Nakajima had cut it to 35s with 75 minutes remaining, the race looked to be Audi's to lose.

Around this time, Britain's Oliver Jarvis got his first taste of the action as a full-time member of the Audi WEC team but there was little he could do five laps down on his team-mate.

With 65 minutes to go Buemi replaced Nakajima and Lotterer followed him straight into the pits where he finally stepped out of the Audi and handed over to Fassler who took to the track to see his rear view mirrors full of the Porsche of Jani.

This set up an intriguing finale because although the Swiss would still need to make a sixth and final stop, both Fassler and Buemi would need to stop again for enough fuel to take them to the chequered flag. Jani soon began to make his presence known and he and Fassler swapped the lead as they diced between traffic before pitting on lap 172. He rejoined 1m10s down on Fassler.

Audi's nerves were set jangling with 25 minutes remaining when the stewards awarded Fassler the stop-go penalty for overtaking on the outside of the track at Club.

By this time Jani was second after Buemi had pitted for the final time and when Fassler stopped for fuel the gap to the Porsche was down from 1m.12s to 37s. He pitted again on the next lap to serve the penalty and rejoined as leader with just 11s between them.

Jani pushed and pushed and reduced the deficit but in a tense final few minutes, Fassler held on for a famous victory.
Tags
Read Full Story