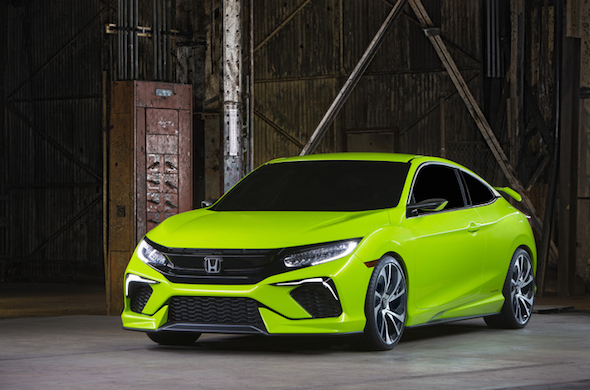 Honda has revealed a new Civic concept at the New York motor show, which previews the styling of the forthcoming 10th generation model.
The all-new model, which is due to go on sale in 2016, will be built in the UK at Honda's Swindon factory, and exported globally, after the brand announced a £200 million investment for the facility, which will see it become the company's global manufacturing centre for the new Civic.

The Japanese firm has released little in the way of firm details as to what we can expect from the new car, but this striking concept shows that it will have more distinctive and aggressive styling than the rather unusual design of the current generation model.

While it has been shown in four-door guise for the saloon-loving US market, the hatchback that European markets will get is expected to look very similar. A Type R version will also be offered, though not until around 2018.

Speaking about the new investment, Jason Smith, director of Honda UK Manufacturing (HUM), said: "By establishing HUM as a global production facility for the Civic five door, Honda is demonstrating its long-term commitment to manufacturing in the UK and Europe.

"This is incredibly important for HUM and is a reward for the commitment and effort put in by Honda Associates in recent years."

What do you think of the forthcoming Civic's new look? Would it tempt you out of your Ford Focus or VW Golf? Let us know in the comments section below.

Honda unveils next generation Civic concept
Up Next