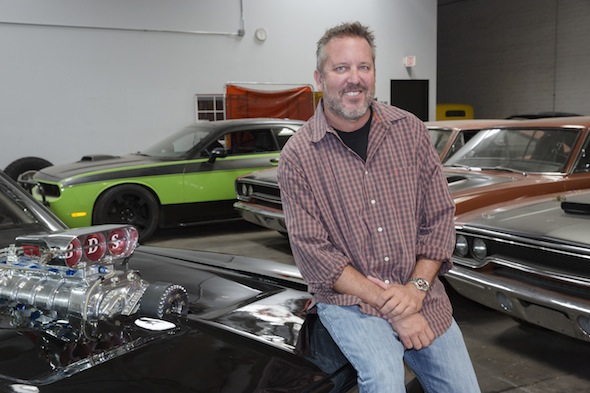 Lovers of over-the-top action films rejoice: the latest installment of the Fast & Furious franchise is about to hit the big screen. From its sleeper-hit origins, this street racing series has grown hugely in popularity, with every successive film pushing the boundaries of automotive action.
To whet your appetite prior to the latest film's general release this week, we caught up with Picture Car Co-ordinator Dennis McCarthy, to find out what we can expect. A veteran of big-budget Hollywood productions, McCarthy is the man who decides who's driving what, and ensures that the cars are looking and performing at their best while on screen.

Here's what he had to say about the new film.

Firstly, can you explain what a Picture Car Co-ordinator does?

It's basically like casting actors and actresses for a living but it's just for cars. We try and put the right characters in the right car.

How much free reign do you have in choosing the cars and getting them prepped?

Quite a bit. I basically pick out what I feel the car should be and then I show it to James Wan (the film's director) and Neil Moritz (producer) to make sure the studio approves, which they do 99 per cent of the time. Then we start building the cars.

How did you get into this line of work?

It was more luck than anything else really. I've owned a custom car shop since I was in my early twenties and one thing led to another. I built a car for some commercials, some TV shows and a feature for Universal Studios and that just led to the series of films that followed after that.

What sort of work do the cars undertake before appearing on set?

They're all different but, for example, Dominic Toretto's (Vin Diesel's character) Charger that's been around since the first movie, was built from scratch. It started off as a rusted shell that we stripped down and sand blasted. We installed new suspension, new chassis, a fuel injected motor with 500bhp, new transmission, everything. So the car is basically brand new front to back.

So the cars that appear are full restorations, rather than just bodies made up to look like the real thing?

I don't know if I'd call it a restoration job but they're full builds. The cars are purpose built for the stunts we need to do and they're customised for the work we want to achieve.

You've worked on a number of Hollywood films. Which was the most demanding?

Anything involved with the Fast & Furious franchise is always the most demanding. There really are no other films out there that push the limits of the automobile like a Fast & Furious movie - so pretty much all of the installations I've worked on.

The Fast & Furious franchise has moved from its tuner car roots to feature more exotic metal and supercars. Why do you think this has been?

I think that it is simply to show the cast maturing. Dominic drives a modified Mazda RX-7 in the first movie, which would look pretty silly 14 years down the line in this seventh film. People's tastes change and I think it's just natural that the cars progress with the personalities of the characters.

And I suppose the personalities of the audience as well?

AOL Cars chats to the man behind the cars of Fast &amp; Furious 7
Up Next


One of the film's more outlandish stunts features the relatively unheard of Lykan Hypersport. Why was this chosen over the more well known Lamborghini or Pagani Zonda for instance?

The reason we chose the Lykan was for its sheer exclusivity. The character who it belongs to is the sort of guy that would drive a Bugatti to Starbucks, so it had to be something that had more meaning than your typical exotic car. It's a very special car that he keeps in a vault – something out of the ordinary that stands out amongst his extensive car collection. The Lykan is the first ever Middle Eastern supercar and there are only seven in existence, so it was our number one choice for that character's car.

How did the latest movie's plane stunt come about? How much of it is real and how much is CGI?

Surprisingly, 95 per cent of it is real. Where the concept came from I don't know, that was the work of Chris Morgan - the writer of the last five films - but for the most part it's all real. The cars were real, we had C130 airplanes and once you see the behind the scenes video you'll see what happens. We literally just let the cars go out the back of the plane and you have stunt guys with parachutes jumping out after them getting the filming all the way down. The parachutes were fully functional so I mean it really is cars coming out of airplanes.

Do you think such stunts like that could potentially alienate fans who originally started watching the series because they wanted to watch fast cars going wheel to wheel?

No, not at all because about three seconds after that parachute sequence happens the cars are wheel to wheel so there's nothing left out. Just because we got the cars now on a plane doesn't mean we reduced any of the other action with the chases.

What happens to the cars after filming?

We've actually been working on them for about the last month, restoring them all for various press and publicity events. We've been shipping them all over the world - we've got cars going to Singapore, Abu Dhabi, Florida - just all over the place doing PR for the film.

Will they be sold afterwards or do they go into the Universal Pictures collection?

They really just stay with Universal collection. They will be on display in various locations and a lot will just go back to storage. Some might be recycled back for future films but they definitely won't be sold.

What was the total cost of the current cars in the film?

The exact figure I don't know, but overall we spent millions of dollars on vehicles, though that includes all the transportation, shopping, maintenance crews and everything else needed to support the shoot. Off the top of my head it's in excess of $10 million, which when you compare that to an actor's fee, is a pretty good deal.

If you had to choose one car from the series what would it be and why, to drive yourself?

It would have to be the Dodge Charger you see Dominic coming out of the airplane with. That's my current favourite because it was just a really exciting car to build. We did a lot of testing with it – it's got true off-road race car suspension underneath so it's very capable. When you see the movie you'll see just what it's capable of, but that's my favourite car to date.