McLaren throws down the gauntlet to Porsche with new 570S 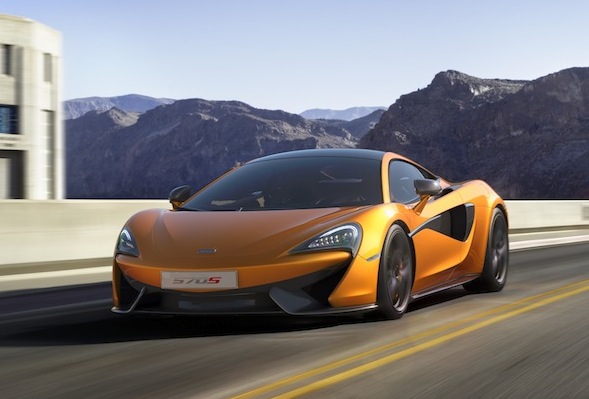 McLaren has unveiled the first model in its new, more affordable Sports Series, the 570S Coupe.
Revealed ahead of its public debut at the New York motor show this week, the new two-seater is being billed as McLaren's most usable car yet, and will rival the likes of the Porsche 911 Turbo and Audi R8.

Where the Woking firm has traditionally operated in the upper echelons of the supercar market, with its flagship P1 hypercar commanding a whopping list price of £866,000, the 570S "introduces McLaren DNA to the sports car segment for the first time" and will cost around £140,000 when it goes on sale after the US show.

It will eventually be joined by a more comfortable GT model, as well as a cabriolet version by 2017. An Asia-only model, dubbed 540C, is also in the pipeline.

Despite being the 'baby' McLaren, there's no doubting the 570S' performance potential. It is fitted with the brand's now familiar 3.8-litre twin-turbo V8 motor, which is used across its model range. In this application, it produces 562bhp and is mated to a seven-speed twin-clutch automatic gearbox. 0-62mph takes just 3.2 seconds, while 0-124mph happens in an eye-watering 9.5 seconds. The 570S will reach a top speed of 204mph.


Key to its savage performance is the car's low weight. Built around a carbon fibre chassis, which itself weighs less than 80kg, the aluminium-bodied 570S tips the scales at a featherweight 1,313kg – some 150kg lighter than Audi's flagship supercar, the R8 V10 Plus. This also benefits fuel economy and emissions, with the 570S returning 25.5mpg and emitting 258g/km CO2.

In terms of styling, the 570S closely follows a design language first seen on its bigger brothers, the 650S and P1, including similar front and rear lights and the attention-grabbing scissor doors. However, there are unique design touches in the form of subtle flying buttresses in the C-pillars and new black detailing along its flanks.

The interior is also closely related to these models, showing the same sparse – though exquisitely constructed – driver focused theme. However, in a nod to its more everyday remit, racing seats are an option, with more comfortable leather sports seats being the default option. The 570S loaded with all the expected creature comforts, too, including Bluetooth, digital radio, sat nav and climate control, all of which are driven through a seven-inch touchscreen, mounted into a floating-style dashboard.

Do you think the McLaren 570S has what it takes to rival the well-established Porsche 911? Have your say in the comments section below.
Tags
Read Full Story Click here to comment