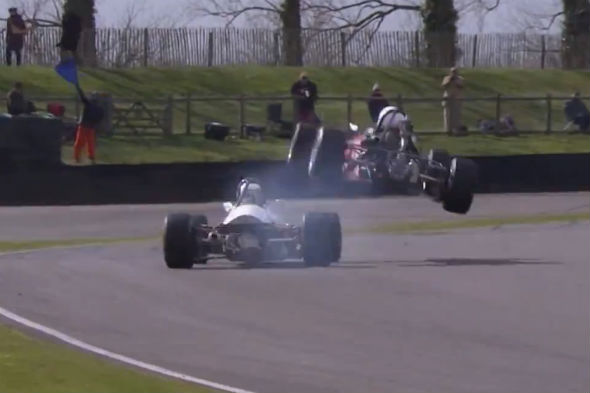 Gravity is a real drag when it comes to racing, always trying to slow you down. One 1960s Formula 3 car driver at the 73rd Members' Meeting at Goodwood last weekend, however, decided not to let this downward force hold him back, instead taking to the skies to get past the car in front.
Rapidly approaching the vehicle ahead, the driver in question clanged into the side of his rival, all in front of an 18,000-strong crowd. Rather than snapping a wheel off his car, attacker Paul Waine, in a DeSanctis Ford, managed to line the rear wheel of his machine up with the rear tyre of the Brabham Ford ahead, driven by Mike Scott, firing his lightweight classic machine skywards.

While Waine's high-speed approach may have flung him clear of Scott's Brabham, it also put him straight into the gravel, leaving the run-over driver free to steer underneath and maintain his position.

What could have been a spectacular overtaking attempt was spoiled, however, as Waine's suspension was destroyed when he touched down.

Watch the racer's bold moves in the video below: