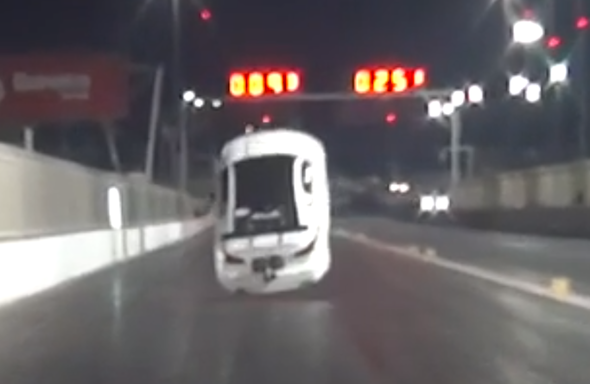 Downforce – that mysterious quality obsessed over race car engineers – is an essential requirement of keeping fast cars pinned to the Tarmac. Carmakers spend countless millions precisely designing their cars to catch the air in such a way that it pushes the body into the road, increasing grip and stability. The huge spoiler affixed to the Porsche 911 GT3 RS isn't there for show, you know.
Creating real downforce isn't just a case of popping down to Halfords and nailing an off-the-shelf spoiler to your boot lid – as has been proved by the unfortunate pilot of the heavily modified Lexus in this video.

Lining up on the start line, this highly tuned IS-F has all the accoutrements of insane acceleration, including a pair of parachutes. However, the token-effort spoiler points to a driver who's paid worryingly little attention to his car's aerodynamics.

That fear is realised as soon as the lights go green. Roaring away from the line, the Lexus generates huge amounts of lift almost immediately, which sends it flying straight over the safety fencing.

So, if you're thinking a huge wing will be just the thing to give your Vauxhall Corsa that sporting edge, click play below and think again.