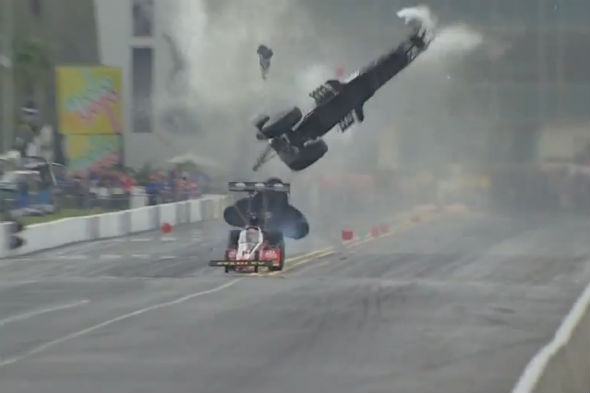 Dangerous driving may be frowned upon in traffic police circles, but nothing sums up dangerous driving more than the sitting-on-a-rocket-and-lighting-the-fuse that embodies drag racing – as Top Fuel drag champion Larry Dixon found out in Florida on Saturday.
Tearing down the drag strip at 280mph, the three-time Top Fuel champion's machine took to the skies as the front of his car sheared off, firing the other half – with him in it – high above his competitor's car.

This first qualifying heat at the Amalie Motor Oil NHRA Gatornationals in Florida saw Dixon's dragster shoot into the air and land hard, sliding into the wall at the Auto-Plus Raceway.

Miraculously, the driver emerged mostly unscathed, wandering over to a waiting ambulance and waving to the crowds, with just a little upper back and left knee pain – not bad for a 280mph smash.

Take a look at the video below to see the spectacular crash as it happened.