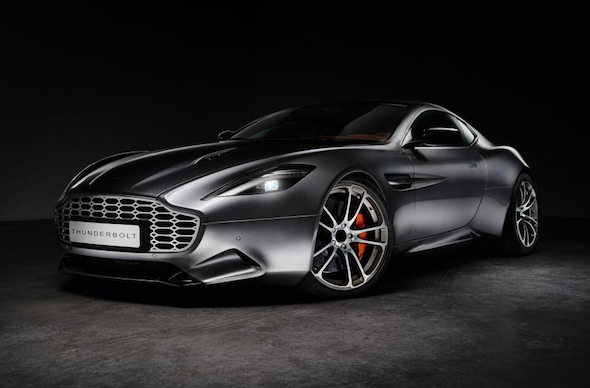 Former Aston Martin design boss Henrik Fisker has lifted the covers off a brand new design study called Thunderbolt.
The concept vehicle, which has been shown off at the exclusive Amelia Islands Concours d'Elegance event in Florida, is based on an Aston Martin Vanquish, but features more heavily sculpted bodywork made from lightweight carbon fibre.

The one-off model is pitched as nothing more than Fisker's personal vision of what the already handsome Vanquish GT car could look like. It features his design cues, such as a crease-less side body and deeply sculpted air ducts.

The car's grille is also more heavily detailed, with a pronounced 'power dome'. It runs down to a more pronounced and voluptuous interpretation of the classic Aston Martin grille, which dominates the Thunderbolt's front end.

Sitting on 21-inch alloy wheels, the Thunderbolt crouches some 15mm lower than the standard Vanquish, for a more purposeful stance.


"I wanted to create an elegant beautiful GT sports coupe, with pure emotional sculpture, that would stay timeless," Fisker said.

There has been no mention of any mechanical upgrades over the Vanquish, and the Thunderbolt is likely to share that car's 568bhp 6.0-litre V12 engine, which propels it from 0-62mph in 3.8 seconds and on to a top speed of 201mph.

The Thunderbolt has been created without any formal association with Aston Martin. Despite this, and the fact that the car has been created as a one-off design study, an "extremely limited number" could make production, depending on how well the concept is received. It is unlikely that production versions would keep the innovative new touchscreen.

Despite being a car industry heavyweight for some time, Henrik Fisker arguably rose to worldwide prominence following the debut of his luxury hybrid GT car, the Fisker Karma. While well received for its striking design and environmental ethos, the Karma was plagued by battery issues and the company was eventually declared bankrupt in 2013.

Has Fisker improved on Aston Martin's design for the Vanquish? Have your say in the comments section below.
Tags
Read Full Story Click here to comment