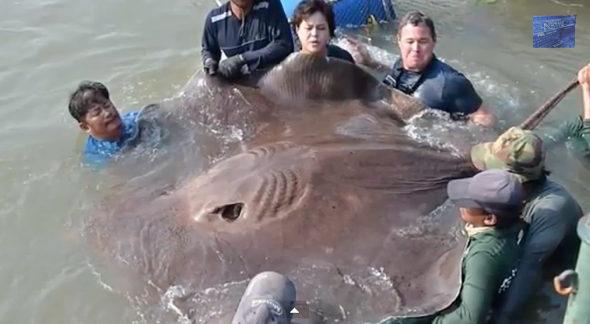 A huge 14ft stingray found in Thailand has broken the record for the largest freshwater fish to be caught by rod and line.

According to the Express, the catch and release was carried out by Jeff Corwin, an American TV nature conservationist, on the Maeklong River in Thailand, with the help of UK-based fishing guidelines from Fishsiam Ltd, which carries out catch and release fishing trips for tourists.

According to the National Geographic, Fishsiam's guides measure rays that are caught and attach tags and microchips, which are used to track growth rates and movements. It adds: "The company uses a special net and cage to keep the animals in the water and to reduce stress while they are being studied."

Nantarika Chansue, a veterinarian and professor at Chulalongkorn University in Bangkok, helped catch and measure​ the animal before it was released.

Ocean Mysteries posted pictures of the find on their Facebook page, writing: "What a MAJOR find! This week, Jeff Corwin and the Ocean Mysteries team stumbled upon a massive freshwater stingray- measuring 14ft long and 8ft wide! Our trip to Thailand is shaping up to be one for the WORLD RECORD books!"

Post by Ocean Mysteries with Jeff Corwin.
They also uploaded their own video of the catch.

It took two hours to reel it in, and seven men to get the stingray out of the water to measure it.

The catch will be featured on the ABC show Ocean Mysteries with Jeff Corwin in the US later this year.

According to the Daily Telegraph, Corwin said: "According to National Geographic, Fishsiam and Dr Nantarika Chansue, a leading stingray expert, this is likely to be the largest fresh water fish ever caught with a rod and reel.

"The battle to bring this giant fish to the boat was epic and it took many hours and multiple guys rotating off and on the reel.

"The experience was a true highlight of the series."

And, according to the Mirror, Rick Humphries, of Fishsiam,said the stingray was pregnant, which was good news for the species: "We have caught over 450 different stingrays and our estimations have been proved highly accurate on the rare occasions we have weighed this species.

"The larger specimens are always female and quite often pregnant, as was the case with this capture.

"The latest capture indicates that these stingrays are growing at a fast and healthy rate."

Why did 250 stingrays wash up on a Mexican beach?

Conan the giraffe is a regular culprit for photo bombing at Six Flags Adventure Land, New Jersey, USA. The cheeky giraffe decided to interrupt a couple's special moment by photo bombing their picture. Deirdre Mead and Jonathon Itskov were delighted with their hilarious snap.

This cheeky meerkat photobombed a group of fishermen's catch of the day picture in Namibia.

Alexis and Steve Espey got the picture of a lifetime when a 'flying' dolphin photobombed their wedding photo at Marineland Dolphin Adventure in St. Augustine.

Snowball, the camera-loving whale was so desperate to get in the frame that she even photobombed a snap of her friend.

Tourist Junichi Masuda, 34, from New York, was taking a snap of the world famous Incan city Machu Picchu, Peru when an opportunistic llama popped his head up at exactly the right moment.

Amanda Leigh and her husband Patrick were posing for photos at the Mystic Aquarium in Connecticut, USA, when 11-year-old beluga whale Juno swam behind them and flashed a big grin.

A scene-stealing sloth dropped in on a group of school kids who were taking part in an International Student Volunteers expedition in Costa Rica giving them an unforgettable holiday photograph.

Diver Alex Mustard got the perfect picture after a super-cute smiling seal photobombed his underwater snap off the coast of Northumberland.

Melissa Brandts and her husband got a surprise visit from a curious squirrel at Lake Minnewanka in Banff National Park.

Before you ask, a photographer did not risk their life to get up close and personal with this pair of jungle cats, the photo was taken on a remote camera on wheels.

This party crashing seal wasn't about to let the penguins have all the fun.

What holiday gift to buy your partner in a budding relationship

Should I give a second chance to a man who ghosted me for a full year?

A Minute Of Kindness: The “Action Nan” Taking On Plastic Waste

The Story Behind Nigeria’s #EndSARS