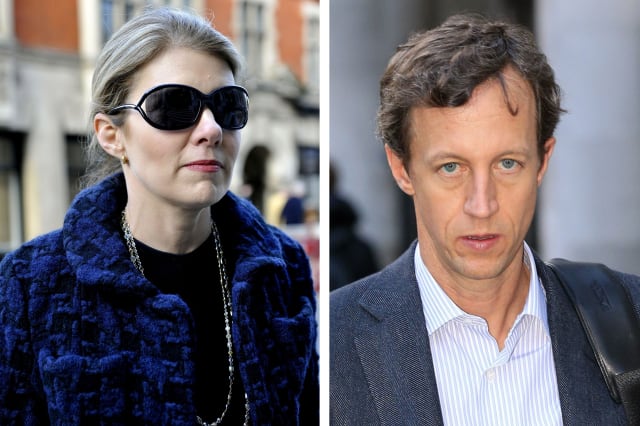 A highly successful businessman from the United States is to pay the wife he is divorcing £72.3 million.

Randy Work, a former key executive in Texas-based private equity company Lone Star, argued in court that wife Mandy Gray, 45, was only entitled to £5m after she failed to keep to the terms of a post-nuptial agreement.

The stance of Mr Work led a judge to tell the 47-year-old husband: "I am not sure you and I are on the same planet."

Mr Justice Holman, sitting in London, also rejected Mr Work's suggestion that in any event he was entitled to more than his wife because of his "special contribution" to the marriage and making the couple rich through his exceptional business skills.

The judge told him: "It would, in my view, be unsatisfactory and gender discriminatory now to make an unequal award."

In the witness box, Mr Work described how he had gone to Japan and made billions of dollars for Lone Star - and millions for himself - buying up real estate, including troubled golf courses, after the Japanese economy became stuck in a sharp downturn.

He told the judge that Ms Gray had been "a good wife" over 20 years and "a good mother" and would have been entitled to at least 70 million US dollars, the "total sum payable" under the post-nup agreement they signed in October 2000.

But he argued that she was not entitled to any of his money, or any of his property, after she came to court to seek a better settlement.

He argued she was only entitled to £5m deemed to be her own separate property, an amount expected to fall to just over £3m when bills are paid.

But Mr Justice Holman, sitting in London, disagreed and told him: "Having offered to pay her nothing you now have to pay her tens of millions of (US) dollars."

After further argument in court over the figures, the judge said the total the amount the wife was to receive in two lump sums would be 109,251,416 US dollars - £72.3m.The court heard in a case expected to cost around £3m in legal costs that both Mr Work and Ms Gray were born in the US. Both had given up US citizenship and were now resident in London.

The judge said the couple had been equal partners in a relationship of more than 20 years.

They married "without a bean" and the husband made his fortune during the course of their marriage while supported by his wife.

The court was told that Mr Work was "the breadwinner" and Ms Gray "the homemaker".

They moved to the UK in 2008 and their matrimonial home has been in London ever since.

The marriage fell apart in 2013 when Ms Gray began an affair with the couple's physiotherapist, referred to as "Mr H".

Ms Gray moved to a flat in Kensington to live with her lover.

The judge said Mr Work was "very shocked and very hurt by his wife's infidelity and affair" and it also caused considerable upset to the couple's two children.

Ms Gray told the court that the post-nup was part of the move to separate their assets when her husband first decided to give up his US citizenship to save tax in America.

Mr Work, described in court as a world-class triathlete, denied that was true.

It was agreed in court that the first tranche of the lump sum, amounting to 60 million US dollars, should be paid by to Ms Gray within 28 days and the balance by August.

Man ordered to pay wife £72.3 million in divorce settlement
The reality star and the basketball star are the most extreme example on our list. They married in style in August 2011 - with a perfume launch designed to coincide with the day. The total cost was said to be $10 million, with much of the cost covered by a magazine deal and individual arrangements with suppliers - including a $20,000 Vera Wang dress and a $6,000 cake. Their marriage lasted 72 days before she filed for divorce because of irreconcilable differences.
The Big Brother fake and the boy band member met on Celebrity Big Brother in 2006 and were married the same year. They had an extravagant ceremony for 45 people at Dartmouth House in Mayfair, with a dress designed by Elizabeth Emanual - who designed Princess Diana's dress. The ceremony was thought to have been paid for out of the £300,000 magazine deal for the photographs. They split after ten months of marriage.
The most expensive wedding on the list is the 1981 wedding of Charles and Diana with an estimated cost of £50 million in real terms, including a five foot high cake. They were divorced ten years later.
The couple were married in New York in 2002 at a cost of $3.5 million. The best man was Michael Jackson, and the maid of honour Elizabeth Taylor. Among the entertainment that evening was a performance by Stevie Wonder. Sadly the couple split the following year, and divorced five years later.
The couple married in 1991 at Michael Jackson's Neverland Ranch, in a ceremony said to have cost $2 million. Michael Jackson even stood in as father of the bride. The couple split five years later.
The couple are said to have spent $2 million on their 2006 wedding in an Italian castle, featuring entertainment from Andrea Boccelli. They divorced after five years of marriage.
Paul McCartney and Heather Mills spent around $3 million on their wedding in June 2002 - renting Castle Leslie in Monaghan, Ireland, laying on a firework display thought to have cost £100,000 and a wedding dress said to have set them back more than £20,000. They divorced in 2007.
The couple were fairly restrained in terms of this list, spending $500,000 on their Manhattan wedding in 1993, featuring a Vera Wang dress with a 27-foot-train. However, they also succumbed to the five year rule, and divorced in 1998.
The darlings of Hollywood married in 2000 at a cost of $1 million. The LA ceremony was decorated with 50,000 flowers, and finished with a 13 minute fireworks display. They divorced five years later.
The British director and the America superstar were married in Skibo Castle in the Scottish Highlands at an estimated cost of $1.5 million. Guests included Gwyneth Paltrow, Sting and Trudy Styler. Madonna wore a diamond tiara once owned by Princess Grace Kelly of Monaco. The couple survived the five year point that floored so many others, but divorced after eight years of marriage.
Up Next

The woman for whom a $975m divorce settlement is not enough