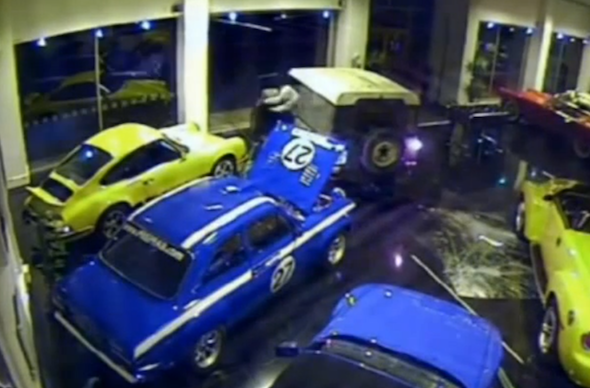 The moment ram raiders staged a daring robbery at a classic car showroom has been caught on CCTV.
Thieves stole a unique 1972 Ford Escort Mexico racing car – estimated to be worth around £120,000 – in a daring raid at the Trackspeed Classic car showroom in Ripley, Surrey, on Tuesday evening.

Reversing at speed through the showroom window in a tatty Land Rover Defender, two men then jump out of the 4x4, with one leaping behind the wheel of the Ford and the other attaching a tow rope to the two vehicles.

As soon as they appear, they are gone again – the Escort towed out into the night and vanishing without a trace.

The Ford appears to have been the sole target of the raid, with the thieves ignoring a number of other classic vehicles including a valuable Porsche 911.

Police are urging anyone who recognises the Land Rover or its occupants, or has seen the distinctive Ford Mexico (registration: DAD 422K) to dial 101.

Click play below to view the footage of the robbery.