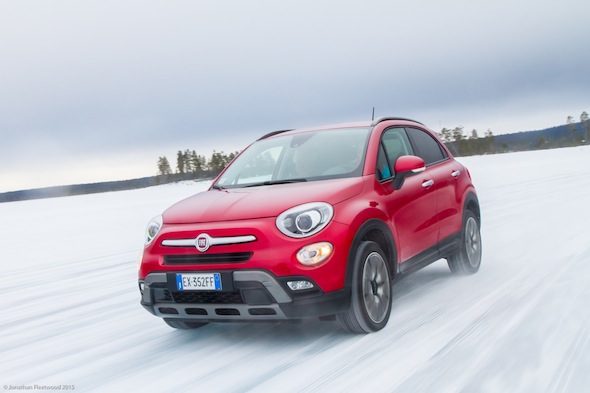 Fiat has introduced its first entrant into the crossover market in the form of the 500X. Its styling is inspired by the extremely popular 500 supermini but this high-riding model is built on the same platform as Jeep's small off-roader, the Renegade. AOL Cars tried it out at Fiat Chrysler's top-secret winter testing ground in Sweden to see if its 4x4 claims were up to muster.
What is it?

The natural progression for all those Fiat 500 owners who feel they need something a bit more grown up – perhaps with enough room to accommodate a growing brood of children. As crossovers are the biggest car segment in Europe, it would have been silly for Fiat not to join in, so this is the Italians throwing their hat into the ring – and we think they might be on to something.

Normally, a soft-roader that has taken inspiration from a retro-inspired city car is not something you'd expect to be driving across snow in, even if it does have a four-wheel-drive system. Regardless, when Fiat invited us to try it on the slopes in Lapland and for a jaunt into the Artic Circle, we had to see how it would do.

A Jeep Renegade engine. Or does the Jeep Renegade have the 500X engine? Who knows for sure, but they're built on the same platform and share the same motors and transmissions. We tested the top of the range 'Cross' 2.0-litre diesel model with 138bhp and a brand-new nine-speed automatic gearbox. The 500X is also available in 1.4-litre petrol and 1.6-litre diesel variants with a five-speed manual or six-speed automatic or manual gearboxes respectively.

Fitted with the most powerful engine, our test car still manages a respectable 51.4mpg on the combined cycle, while emitting CO2 at a rate of 144g/km. Those looking for the most frugal option should consider the 118bhp 1.6-litre diesel, which returns 68.9mpg and whispers out CO2 at 109g/km – meaning road tax of just £20 per year under the current rules.

Fiat know that a huge proportion of 500X owners won't be heading off-road, so it comes in both 'City Look' and 'Off-Road Look' guises. As we were in snowy Sweden, the Off-Road Look seemed appropriate, and featured chunky plastic under-guards to protect vital components and unique 'Trekking' alloy wheels.

The interior still isn't knock-your-socks-off luxury but it is comfortable and offers good build quality. Both models come packed with all the options you could want, such as keyless entry, climate control, heated seats – perfect if you're out in the snow – plus safety features like brake assist, blind spot assist and a rear-view camera. The built in media system is easy to use with connectivity for your media device or phone and satellite navigation featuring 3D landmarks.

First drive: Fiat 500X
Up Next

Quirky crossovers are springing up left, right and centre, and the 500X is looking to steal some of their limelight. The obvious rival is the Mini Countryman, which shares the 500's retro outlook and offers similar levels of practicality. The new Fiat will also have to square off against the likes of the Nissan Juke and Renault Captur, which already fulfill owners' desire for something that stands out on the road.

On snow, excellent. On normal roads we can't be so sure. We tested the 500X on ice with all-weather tyres and it still felt incredibly stable and planted on the tracks made from sheet ice, with little body roll in the corners. As we pushed harder it would start to squirm and there were some close shaves when it looked like we might run off track, but a well-judged stability control system saved our blushes. The absorbent suspension also made for a relaxed ride on our snowy adventure, though we'll reserve final judgment until we've tried the 500X on the notoriously rutted tarmac we endure in the UK.

The 500X feels like a complete package compared to other Fiats, which are often strong in some areas but flawed in others. It's easy and enjoyable to drive and you'd struggle to miss it on the road. It also feels good quality and somewhere you wouldn't mind sitting in traffic. Those who wanted a Fiat 500 but couldn't justify such a small car will surely be queuing around the block for this.