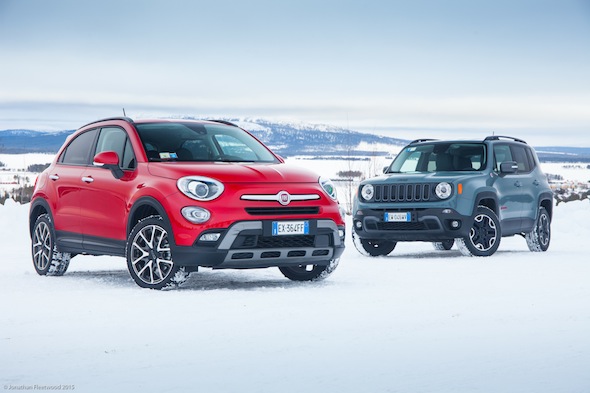 Deepest, darkest Sweden isn't the first place that springs to mind for a drive in a cutesy Fiat. In fact, you'd probably be better off playing it safe and choosing a big ol' Volvo or Quattro-equipped Audi saloon as your transport on these treacherous frozen roads.
But last week, AOL Cars took to the winter testing tracks of Fiat Chrysler Automobiles on the outskirts of Lapland, not far from the Arctic Circle (in fact we ventured into it for about an hour) in Fiat's new crossover - the 500X.

This car is typically aimed at young adults who are growing out of the dinky Fiat 500 supermini, but aren't convinced the 500L MPV or Panda hatch are cool or quirky enough. It still has the distinctive styling details of the 500, with those big round headlights and '60s curves, but with a much taller stance, a spacious interior and the option of four-wheel-drive.

Despite this added all-paw grip, when Fiat invited us to try the 500X at its winter wonderland we were a little bit daunted. However, under its trendy exterior it is mechanically the same as its sister company's offering, the rough-and-tumble Jeep Renegade, which put our minds at rest slightly.

The Renegade was also taking to the snow, to prove just how capable this little 4x4 is when the Tarmac runs out. It might be small, but it still has all the mighty "go anywhere, do anything" capability that Jeep owners demand.

Both cars come with the same chassis and engine, and our test car was fitted with the optional nine-speed automatic gearbox. But as the two models have been specified with very different suspension, interiors and exteriors you would have no idea they were related without lifting the bonnet.


The 500X is an extremely comfortable car. It feels like the most complete package Fiat has produced in a long time. Even for me, at a measly five-foot four-inches high, the standard 500 feels small, especially with passengers in tow. The 500X still isn't huge from the outside but inside it feels vastly more spacious.

The winning ingredient for the 500X though? It feels safe. Even driving like a woman possessed on the ice, there's little fear that it's all going to go wrong and end up in an accident - although winter tyres play a part in that. The added height of the vehicle gives you a commanding driving position, making the 500X easy to place on the road, while the well designed seats offer a decent blend of comfort and support.

The Jeep Renegade on the other hand, proves just how different you can make two cars that share the same underpinnings. This may be the smallest SUV in the brand's armoury but it's still a genuine off-roader with high ground clearance, rugged looks and a go anywhere attitude.

Inside it might have a more plasticky finish than the 500X, but this more utilitarian approach puts you in the right frame of mind to get the car serious muddy. As it's built for adventure, the driving style feels more positive in the Renegade, the steering is more direct and you're sat up higher, compared to the laid back attitude of the 500X.

Which you'd put your money on will ultimately depend on whether you value go-anywhere ruggedness over being seen in the latest fashion accessory. However, despite both of these models being pitched primarily at young urbanites, they're both more than able to back up their four-wheel-drive billing. Soft roaders? Don't believe the hype.
Tags
Read Full Story