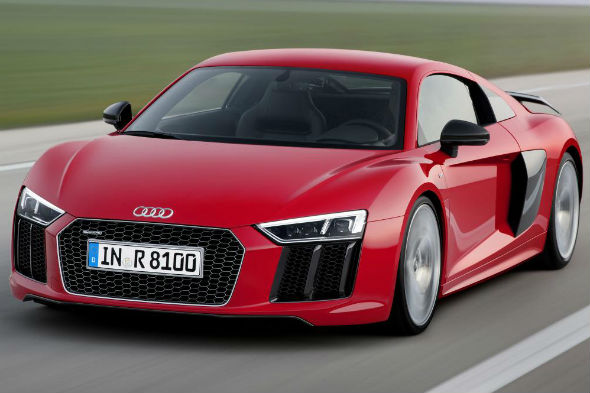 Audi has completely overhauled its popular R8 supercar that the company launched way back in 2007, which is set to be unveiled at the upcoming Geneva motor show.
The brand new V10 supercar features Audi's Quattro four-wheel drive system and 533bhp or 602bhp on tap – courtesy of a 5.2-litre motor – along with a reduction of up to 50kg in weight thanks to the use of lightweight aluminium and carbonfibre reinforced plastic. The more powerful model should be able to sprint from a standstill to 62mph in a rapid 3.2 seconds and keep going all the way to 205mph – enough to ensure an electrifying driving experience.

In 602bhp form the mid-engined R8 V10 Plus is the fastest ever production Audi – capable of slamming through the 124mph mark in a mere 9.9 seconds – and the first to break the 200mph mark. Helping to transfer the substantial horsepower-count to the road is a seven-speed S tronic automatic gearbox and a four-wheel drive system that can transfer 100 per cent of the engine's power to front or rear axles, depending upon the grip available.

The new R8 includes Audi's sophisticated 'drive select' adjustable driving settings, which in this incarnation can even optimise the car's suspension for the specific road surface – handy in a car which has been set up for both road and track. Likely to be less important to potential buyers is fuel economy, though both models offer 10 per cent greater economy at 23.9mpg and 22.8mpg respectively.

The second-generation R8 will be available to order in the UK in May, with the first customer deliveries taking place towards the end of the year. Prices are yet to be confirmed.

Ina Garten teaches her viewers how to make a giant cocktail