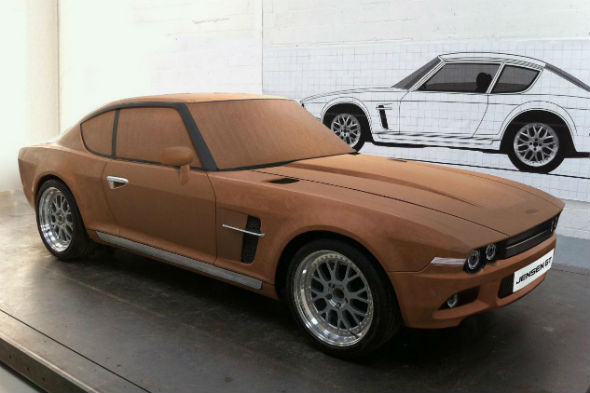 Iconic British carmaker Jensen is set to return to the market with its first "officially sanctioned" model for 13 years. The brand which created the heavyweight Interceptor – cited as the first performance car to use four-wheel drive, ahead of the Audi Quattro – is looking to recreate the formula for the 21st century with this, the Jensen GT, plus a new Interceptor model.
Following the success of modernised Interceptors produced by Jensen International Automotive – which has been rebuilding classic Jensens with modern underpinnings – The Jensen Group, lead by ex Aston Martin boss Tim Hearley, has created a clay model of the new Jensen GT. The GT model features lines that seem to take inspiration from classic Ford Mustangs, and should serve to bridge the gap between Jensen's classic machines from the 1970s and the company's upcoming Interceptor successor, mooted for release in 2016.

The retro GT should be hand built to order, with pricing likely to be determined by customer's individual demands. However, it is likely that those looking to get their hands on this new model will need to stump up around £350,000. Buyers are also likely to be able to choose the tune of the engine and which gearbox they want, amongst myriad other options.

A prototype of the GT is already being constructed with the first cars likely to be completed in early 2016. The company claims that though the styling of the GT will hark back to yesteryear, the technology will be right up to date, with it being a more performance-oriented model than the Interceptor, offering a "level of refinement above that of the average muscle car," reports Autocar.

The Interceptor 2 should also go on sale in 2016, taking cues from its predecessor but featuring 'thoroughly modern" underpinnings, to make it a true grand tourer.
Tags
Read Full Story Click here to comment