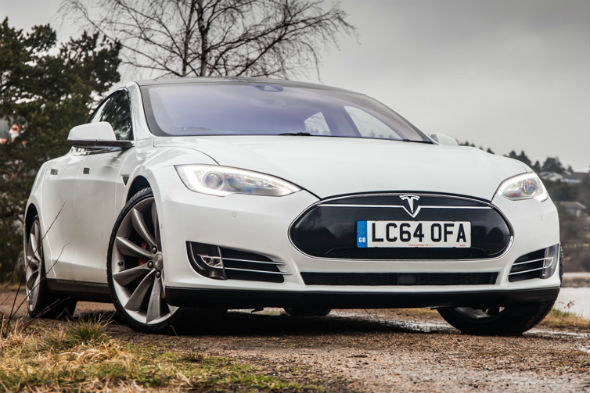 Electric vehicles have finally managed to capture car buyers' attention, with more and more drivers getting behind the wheel of lithium-powered cars such as the Nissan Leaf and BMW i3. Though practically all of these machines have been compact family cars to date, there is now a new option, in the form of the Tesla Model S – the only all-electric luxury car currently on sale.
Proving hugely popular in its home state of California, the Model S is now starting to make its mark on European car markets – chalking up the title of being Norway's bestselling car – thanks to a number of rebates, tax exemptions and the ability to fully charge the battery in 75 minutes at Tesla's growing network of 'Superchargers'.

The Model S is a sleek, Audi A7-rivalling large car, which has created its own new genre as a rapid, upmarket fully-electric luxury machine. Thanks to its battery pack located under the cabin and a motor sandwiched between the rear wheels, the Model S offers a spacious five-seater cabin with large boots under the rear hatchback and under the bonnet.

The Model S even gives buyers the choice of seven seats (two of which are suitable for children) and four-wheel drive in its more powerful incarnations. Despite the electric wizardry going on under the skin, the Model S offers very strong performance, with even the entry-level version accelerating to 60mph in less than six seconds.

It can also travel further between charges than all other mass market electric cars, with the base model capable of up to 240 miles between charges, which rises to 300 miles in P85D form and 310 miles in mid-range 85 form. Thanks to Tesla's Supercharger network, the Model S also charges faster than rivals, with a full charge for most models taking 75 minutes, and a half-charge around 20 minutes.

A second boot. The important electric drivetrain can be found underneath the cabin in the form of a large bank of batteries, while the motor is situated between the rear wheels. Model S 60 and 85 versions boast a strong 375bhp, while the range-topping four-wheel drive P85D churns out a supercar-beating 691bhp.

The Model S is a high-tech machine with a high-tech interior. All cars come with a jaw dropping 17-inch touchscreen media system, which controls nearly all of the car's core functions, with just two buttons appearing on the dashboard – one to open the glovebox and the other to activate the hazard lights. Steering wheel controls let the driver view many of these functions through the digital dials that surround the speedometer.

Allied to this huge display is a slick sat nav system – which displays Supercharger locations across the continent, letting you travel easily to each location – as well as 3G internet access and internet radio functionality along with a high-resolution reversing camera. Such is the size of this screen that you can even use it in a split-screen mode, where the sat nav map and radio info can be displayed simultaneously. Unusually for a luxury car, however, leather upholstery is not standard.

Electric cars are nothing new, but you'd be hard-pressed to find an electric machine to rival the Model S. Not only does it offer around two to three times the real world range of most electric cars, but it boasts eco credentials that more conventional petrol and diesel rivals just can't match. While the most similar electric car in execution is the chic BMW i3, which costs about half price of the Model S, buyers are more likely to consider the Tesla a rival to upmarket petrol machines from the big German car manufacturers.

Most similar to the luxurious Tesla are the Audi A7, BMW 6 Series Gran Coupe and the Mercedes CLS – which all come with petrol and diesel engines and offer luxury transport for four passengers. While prices for the Model S align closely to these models, Tesla emphasises that drivers can save significant amounts on running costs, with free car tax, discounted company car tax rates, and by charging the car at Tesla's free-to-use Superchargers.

The first impression of the Model S is just how rapid the machine is. With instant power from the electric motor and no gear changes to blunt the pace, this is one quick car. Even on the German autobahns this electric machine feels punchy, though it is still extremely easy to drive.

Thanks to its automatic-style gear selector those behind the wheel can select 'Drive', 'Reverse' or 'Park' which automatically applies the handbrake. Simpler still, you can often drive the car using one pedal, because, as soon as you lift of the throttle the car slows quickly, as 'regenerative braking' adds charge back to the battery.

Refinement levels are high with little wind noise and nothing but a gentle hum from the batteries and motor when working the car hard. The ride is on the firm side with the 21-inch alloys fitted to our test car, though it its mostly smooth and comfortable for passengers.

The Model S very much seems like a car from the future. No other electric car can match it for range, charging time or pure acceleration, while it can hold its head high against conventional petrol and diesel rivals – both in the value stakes and as a luxury driver's car.

Practicality is also very good, with a reasonable amount of room for five passengers, a large rear boot and a second loading area under the bonnet. Those who are used to petrol and diesel models may find the need to charge up a little frustrating on longer journeys, but with Tesla's Supercharger network rapidly expanding – and being free-to-use for owners – this many buyers would quickly get used to this.

Nearly all other electric cars feel flawed as an only car for families, however, the Tesla Model S not only gets around most of these drawbacks, but it offers a driving experience that even combustion-powered machines can't match. For these reasons it makes an extremely compelling purchase – even for £60,000.