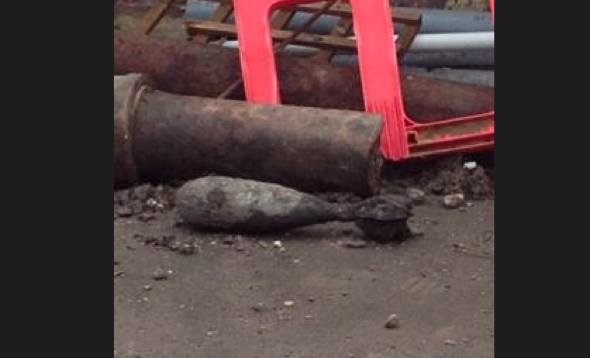 A B&Q in south London had to be evacuated after an unexploded World War II bomb was found near the premises.

The shop on Burlington Road in New Malden was closed on Friday afternoon after the object was reported to police.

A spokesman for the Met told the Evening Standard that they were alerted to "reports of an object believed to be an unexploded World War II bomb".

Kingston Police kept the public up to date on Twitter, writing:

This is the little trouble maker causing all the problems in #NewMalden at the moment. Police & @LondonFire on scene. pic.twitter.com/LP6oe6QFiB


Before letting everyone know the situation had been dealt with.

According to ITV News, a London Fire Brigade spokesman said on Friday: "The Brigade was called at 13.47pm and the incident was over for us at 2.44pm.

"A mortar shell was declared safe by police, there was no action by the Brigade.

"A cordon that was in place has been removed and all roads are now open."

Fancy a walk under the River Thames? The Greenwich Foot Tunnel opened in 1902 so that south London residents could walk to work in the docks on the Isle of Dogs. Designed by Sir Alexander Binnie, the 1,217 ft long tunnel provides a pedestrian link between Cutty Sark Gardens and Island Gardens, Tower Hamlets. An incredible 200,000 glazed white tiles line the tunnel walls and when you emerge at the riverside at Island Gardens you can enjoy splendid views of Maritime Greenwich. Nearest stations: Cutty Sark or Island Gardens on the DLR network.

It was temporarily removed for Tower Hamlets Council to remodel the roundabout in the Isle of Dogs where it stood, but French sculptor Pierre Vivant's Traffic Light Tree is said to be returning to East London and will be re-installed on the Trafalgar Way roundabout near Billingsgate Market. The iconic green Traffic Light Tree is a multi-facing assortment of red, amber and green signals that often confuses motorists but was installed to imitate "the natural landscape of the adjacent London Plane Trees, while the changing pattern of the lights reveals and reflects the never ending rhythm of the surrounding domestic, financial and commercial activities". Nearest tube: Canary Wharf.

Find Ancient Rome in the centre of London just a few hundred yards from Tower Hill Tube station. The London Wall was the defensive wall first built by the Romans around the Roman city of Londinium and represented the status of the city, as well as providing defence. Many of the buildings which once hid the stone wall set north of the Tower of London have been cleared away so you can enjoy a clear view of the site that defined the shape and size of the city for over a millennium.

Located in the garret of St Thomas's Church near London Bridge Underground Station, the Old Operating Theatre was used during the 19th century by doctors who performed amputations, surgeries and operations in front of their students. Visit the refurbished theatre and browse natural remedies, including snail water for venereal disease and bladderwrack for tuberculosis. There is also a display of amputation knives and blades and demonstrations on Victorian speed surgery and how drugs were made. Nearest underground: London Bridge.

In Twickenham, visitors to York House can check out the surprising and odd statues of naked female figures in the gardens. The Naked Ladies adorn a cascade and pool, and were imported from Italy by a fraudulent financier who took his own life when he was convicted in 1904. The statues depict eight Oceanids and a pair of aquatic horses. Nearest station: Twickenham.

For the ultimate weird day out in London, head for Ripley’s Believe It Or Not!, home to the unusual and plain bizarre. There are more than 700 artefacts and curiosities from all around the world to marvel at, including an elaborate Indian Mardi Gras costume, authentic Ecuadorian shrunken heads and prehistoric turtle shells over 215 million years old. Don't miss the scale model of Tower Bridge made entirely out of matchsticks, a portrait of Kate Middleton made from lipstick kisses and a life-sized knitted Ferrari made from 12 miles of wool. Nearest tube: Piccadilly Circus.

Highgate Cemetery isn't just any cemetery. Its most famous resident is Karl Marx, whose memorial in the East Cemetery attracts visitors from all over the world. George Eliot, Christina Rossetti and Douglas Adams are other famous Londoners buried here. Laid out in 1839, the West Cemetery is home to ivy-clad monuments and the most impressive architectural features of the cemetery. It can only be visited by guided tour. At the weekend, just turn up and take the next tour (you need to book in advance for weekday tours). Nearest tube: Highgate.

Once used by a single officer as a lookout during political demos in the 19th century, this modest box in a corner of Trafalgar Square is London's smallest police station. It's made from a hollowed-out lamp post and apparently had a direct line to Scotland Yard. Today it is used as storage for Westminster's street cleaners. Nearest tube: Charing Cross.

Take a stroll down the cobbled wizarding Diagon Alley from Harry Potter, close to London's Charing Cross. The alley where all items on the Hogwarts supply list can be bought was inspired by Cecil Court, which happens to be a haven for book lovers with its rare and antique book shops. The shop fronts remain as they did more than a century ago with their traditional hanging signs inviting shoppers to browse maps, children's books, stamps and theatre posters. Nearest tube: Leicester Square.

London's only remaining sewage lamp is currently in use and can be found burning day and night down the side street of the Savoy Hotel. Several thousand of the lamps were installed in the late 1800s to burn methane waste from the sewer system but they became unpopular due to the bad smells and occasional explosions they caused. Locals renamed Carting Lane, where the last Victorian lamp stands, 'Farting Lane'! Get there: Nearest tubes are Embankment or Temple.