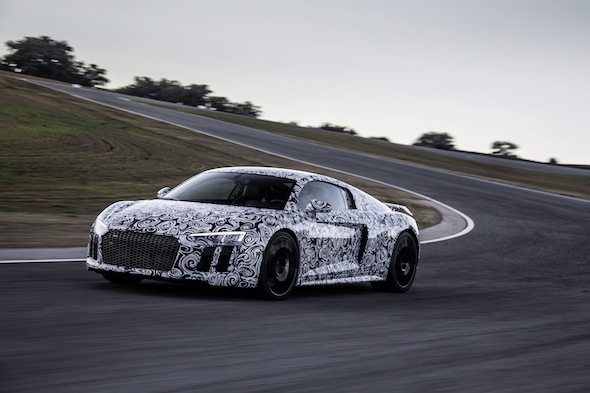 Back in 2006 Audi was, to most people, a purveyor of high-quality – if slightly dull – executive saloons. It simply didn't have a performance car to draw keen drivers into its showrooms.
The R8 changed all that. Here was a low-slung, mid-engined four-wheel drive supercar, based on the underpinnings of a Lamborghini Gallardo, but with the sharp styling and build quality for which Audi had become known.

It proved to be a masterstroke, and ushered Audi in as a fully paid up member of the supercar club. Now the brand is hoping to repeat its success with an all-new model.

Due to make its public debut at next month's Geneva motor show, the new R8 will come with a choice of V8 and V10 engines, the latter being the 602bhp 5.2-litre unit currently used in the Lamborghini Huracan, and which gets that car from 0-62mph in 3.2 seconds and on to a top speed of over 200mph.

The R8 will also come with Audi's new laser headlights, which will be offered as an option over the standard LED units.

Starting the hype-machine early, Audi has released a video, showing exactly what its new model (hidden in camouflage, unfortunately) can do in the hands of one of its works racing drivers, Frank Stippler, while the MD of Audi's Quattro division talks us through the finer details on what is one of the most eagerly anticipated cars of 2015.