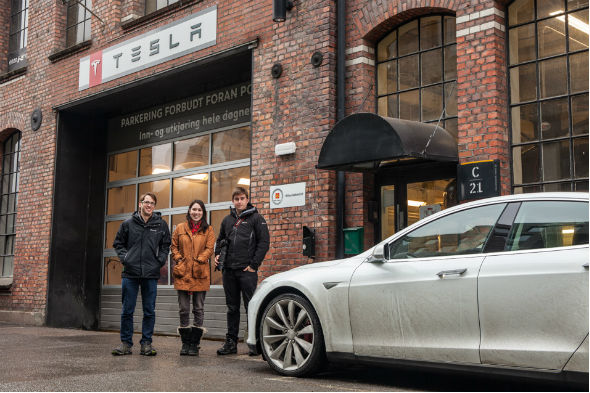 Despite our concerns about running out of charge, being outpaced on the autobahn by speed-crazed Audi-driving Germans and being marooned wing mirror-deep in snow, the Model S hadn't skipped a beat in ferrying us from Blighty to Sweden. Our only real criticisms centered on the seats, which weren't as comfortable as they should be for a luxury car, and the windscreen wipers, which were pretty useless, with one leaving streaky smears and the other failing to shift dirt from the glass.
Jumping into the car for the final day of our trip we headed into the wilds of Sweden for scenic forest shots, where we encountered the first snowfall of the trip. An hour later snapper Johnny emerged from the trees, sodden to the bone and resigning himself to sitting on a bin bag to avoid drenching the Model S's interior.

Heading back to the motorway we soon crossed over into Norway, where border guards pulled us over and demanded to see our passports. Content with our story, they left us to hit the Norwegian roads, where even the fastest stretch of motorway was limited to a meagre 110kph (68mph) – not much in a car armed with 469bhp of instant electric muscle.

A short way into Norway we stopped at our first Supercharger. Pulling in there were three other Teslas parked up, so we plugged in and went inside for some of the best food we've ever encountered in a service station. Popping out to grab a notebook 10 minutes later, however, all of the Supercharger spots were filled, with another Model S just arriving. Clearly Tesla has made its mark on Norway.

Tesla Model S: Autobahns, fjords and Oslo streets
Up Next


Talking to the amassed owners, one Tesla driver told us that his son was planning to drive his car from Norway to the UK, while another – a security guard – talked us through his reasoning for buying the car, namely how affordable it is thanks to Norwegian tax breaks, and hinted that he was hoping to swap it for the supercar-rivalling P85D that Tesla will soon be launching.

After brimming the batteries again, we set off for Oslo, our final destination. Back on the motorway the number of Teslas rocketed as we neared the Norwegian capital. En route we stopped off at the first Tesla dealership in Norway – a compact site located in an industrial hinterland – before making our way to the main Oslo showroom. Arriving at the back of the showroom, we were greeted with the sight of row after row of Model Ss being serviced. Despite the 1,457.4 miles that we'd covered, all of them annihilated our car in the filthiness stakes. Clearly car washing isn't a popular pastime during Norwegian winters..,

After a chat with several of the salesmen, we borrowed a second Model S to grab some final moving photos, before beginning the endless task of emptying the car. Looking at the pile of bags that emerged from the boot we soon realised just how much kit the car had swallowed – without us even thinking about loading stuff into the large front boot. Traipsing to the nearest station with heavy bags in tow, the real appeal of the Model S soon becomes obvious.

Here you have a car that can whisk five people and a load of luggage in reasonable comfort across Europe – for free. Having topped the 130mph mark on the autobahn, travelled up to 173 miles per charge (with some charge remaining), accessed internet on the move through a 17-inch touchscreen media system and enjoyed appreciative stares from other drivers, the Model S has a level of appeal that no other electric car – and few petrol or diesel models – can match. Consider the fact that this is Tesla's first mass market car and we eagerly anticipate things to come from this Californian company.
Tags
Read Full Story Click here to comment