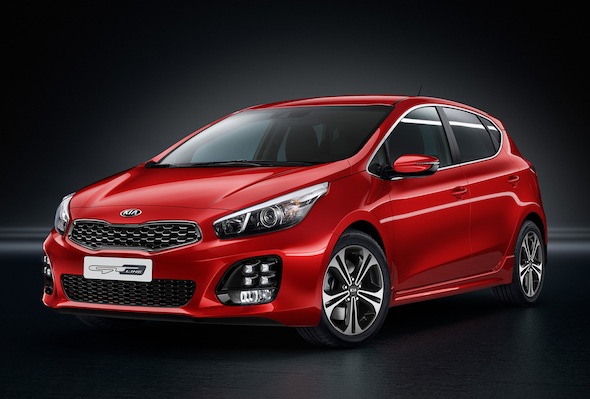 Kia is to unveil a new GT Line specification for its Cee'd hatchback range, at the Geneva motor show early next month.
The sporty new trim level will be available on five-door Cee'd, three-door Pro_cee'd and SW estate models. Sitting below the powerful GT models, the GT Line is aimed at those wanting the aggressive styling of the hot-hatch, but without its 201bhp turbocharged motor.

It gets the same quad LED daytime running lights, twin exhausts and pumped-up body kit of the GT, and features LED light clusters at the rear. GT Line models sit on unique 17-inch alloy wheels, too.

Inside there is white, grey and black upholstery finished with grey stitching, while the dashboard has a piano black finish. Items such as the steering wheel and alloy pedals are taken straight from the range-topping Cee'd GT. 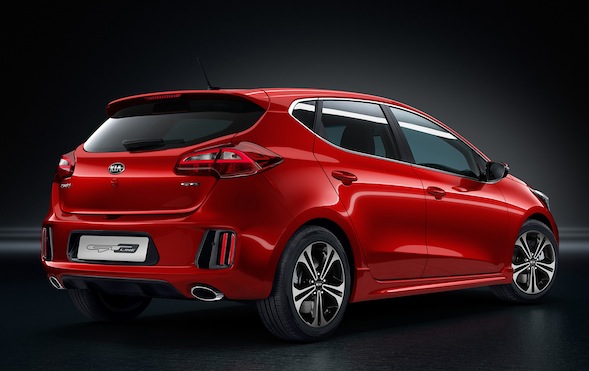 
Kia is using the GT Line to debut its all-new 1.0-litre three-cylinder turbocharged petrol engine. Designed to be cleaner than the 1.6-litre unit currently offered, it develops 118bhp. Economy and emissions figures are yet to be confirmed, but expect fuel consumption of over 50mpg and CO2 emissions of under 120g/km.

The 1.6-litre diesel alternative has also been uprated, with power jumping from 126bhp to 131bhp. Kia is claiming that CO2 emissions have also been reduced, though has not yet released any figures.

Alongside these developments, Kia will also be showcasing its brand new seven-speed twin-clutch automatic gearbox. Unusually, this gearbox will only be offered in conjunction with the 1.6-litre diesel motor, in place of the conventional six-speed 'box currently used.

The Kia Cee'd GT line will reach UK showrooms towards the end of this year, and will be offered with the brand's seven-year, 100,000 mile warranty as standard. Full price and specification details will be announced closer to its launch date.
Tags
Read Full Story Click here to comment