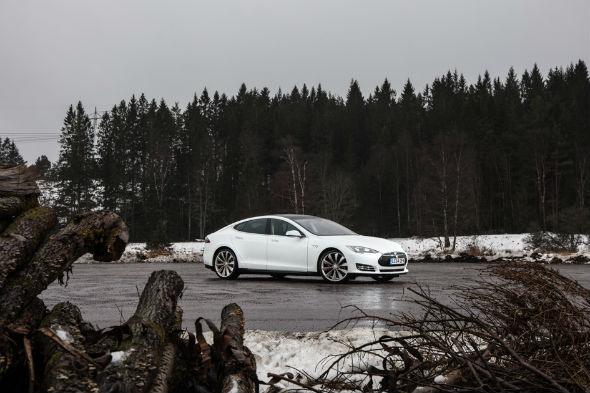 Just three days after leaving the UK and we'd already crossed France, Belgium, the Netherlands, Germany and Denmark in the Tesla Model S – all without running out of charge. Now in the middle of Sweden we were inching closer to the Model S's European heartland – Norway – where we'd heard tales that the streets were paved with Teslas.
Despite the folklore of Norway being a land of Model Ss, we were yet to see any on the road on the 1,100-odd miles that we'd covered – apart from feeding at the many Superchargers we'd passed on the way. What we had finally found, however, was snow. Despite the white stuff covering the trees and verges, the roads were miraculously clear (take note British councils).

With hefty 21-inch alloys and wide wheels on our machine, all clad in winter tyres, traction wasn't a problem – with the rubber appearing to find more grip than it did in mild Blighty. Behind the wheel, the impression was that nothing short of hooliganism could cause any untoward to happen – even with the substantial power on tap.

Scoping out some scenic snowy shots on foot from our overnight accommodation we set off in the Model S – dropping off snapper Johnny in all number of snowy verges – while trying not to drain the battery too much by warming the frigid cabin. With Alpine trees all around and the dusting of snow, we were beginning to feel very Scandinavian. All we needed to round off the mood was a dose of Abba, a flat-pack session and a helping of stinky fermented fish - Surstromming.


With the whole day to cover less than 200 miles, photography was the order of the day. Heading north I pointed the bonnet towards Uddevalla, our next charger. Pulling into the Supercharger, outside a branch of the delicious Scandi-burger masters 'Max', we had covered 146 miles since last topping up the car – the second longest jaunt of the trip. With 49 miles' charge left onscreen we suspect that we would have chugged to a halt after around 180 miles – a far cry short of the claimed 312 miles figure – but very useful compared to nearly all other electric cars (and likely reduced by Sweden's near-freezing temperatures).

Chowing down on a Max burger we watched as an ambitious Volvo V60 Plug-In hybrid driver plugged in at one of the Tesla charging spots, soon followed by a grubby Ford Fiesta – very much not an electric machine. With memory card space cleared and a quick Google Streetview browse around the surrounding coastline, it was time to test out the Swedish fjords. As it turned out, the Swedish fjord of choice was even more pretty than its Danish counterpart – and the locals more friendly, avoiding the temptation to set the police on us.

Heading away from the waterfront and into the hills, we discovered a set of switchbacks worthy of a rally stage – as proven when an oversized coach had to drift around one to maintain speed up the slope – and an array of photos. Snapper Johnny worked his fingers and cameras to the bone in the freezing conditions and as soon as he was completely saturated, we relented and let him back into the car.

After getting our fill of photos we returned to the Uddevalla charger for the last top up before heading over the border into Norway on day five. Fully charged, we headed northwards to our accommodation for the night – a lakeside holiday village. Parking our white car behind a pile of snow in the vast car park we headed inside, still imagining the Tesla-studded city that we'd heard Oslo was. Day five would reveal all.
Tags
Read Full Story Click here to comment