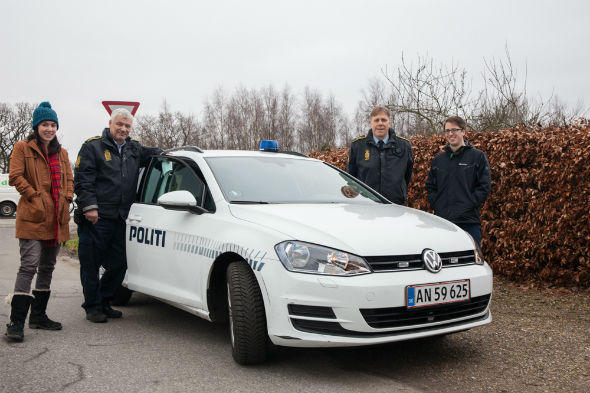 By the time we reached the northernmost prong of Germany in the Tesla Model S yesterday, we'd already established that here was an electric car that could cover long distances with ease – albeit with hour-long charging stops en route – as well as blast down the autobahn at more than 130mph. What had also become evident, however, was that none of us found the seats particularly comfortable.
With its sleek profile and batteries stuffed under the cabin, we're sure Tesla didn't have much room to play with, but the lack of back support from the driver's seat was beginning to become annoying, with the flat, but raised floor in the rear not offering the most comfortable posture for snapper Johnny and writer Becca. However, Denmark was calling, so we hit the road again.

A short drive later we hit the Danish border, which was signified by nothing more than a small sign and a brace of discount sex shops. Leaving these tawdry surroundings behind, we headed east to our first fjord of the trip with Johnny chomping at the bit to give his camera some exercise.

After a few rounds of shots, though, something else grabbed our attention. Stopping to pick up Johnny from his photo spot, a dark Mercedes E-Class pulled up behind us. Thinking that the driver had simply not realised that we were stopped, I pulled off. However, turning left and then right over a staggered crossroads the Merc driver followed, at what he no doubt thought was far enough back not to be noticed. Keen not to look suspicious – had he thought we'd done something wrong – I resisted the temptation to flatten the throttle into the carpet.

Turning right at the next junction our tail was still following us, though. Just to know for sure whether we were being completely paranoid or not, we pulled up with the premise of searching through the boot for something. Our tail stopped 100m behind us. Game on, we headed into the next village when said Mercedes driver gave up on his stealth tactics and was sat loud and proud on our rear bumper. Naturally, Johnny pulled out his camera for some reconnaissance shots.


Pulling into the next car park to set up some camera kit, our Danish stalker drove slowly past, shooting us a menacing glare. When he eventually parked up at the far end of the car park we ignored the urge to tell him to bugger off. 20 minutes later though, after notching up dozens more scenic shots, we pulled over in a residential street, with Mr Mercedes still in tow, pulling up out of sight. Walking over to introduce himself to our stalker, Johnny was greeted with the back of the car as the driver drove off. As Johnny came back to the Tesla perplexed, we soon received our answer as a Danish police car arrived, keen to find out what we'd been doing. A quick chat later and the Danish fuzz were happy that we weren't causing trouble, letting slip that Mercedes man had reported us, thinking we were involved in a spate of robberies that had plagued the area.

After waving the police goodbye, we hit to the main roads, passing the kind of ranch that wouldn't have been out of place in the remake of Dallas, with miles of white picket fence criss-crossing its land. Now confident of the Model S's range we skipped the next Supercharger, instead making a visit to the epically named Middelfart charger. Just before we juiced up the Model S, however, we stopped in the shadow of an oversized bridge, which connected two of Denmark's numerous landmasses, for photos. As the remaining charge in the batteries dropped to under 30 miles the car began to fire warning messages up on screen telling us to feed the Tesla.

With 140 miles since our last charge, we brimmed the batteries. After around an hour plugged in and 249 miles of range showing on the dash, we pointed the bonnet towards Sweden. Stopping at the Tesla showroom in the Danish capital, we hoped to add another dose of charge before hitting the land of Abba and Ikea. However, both of the dealership's Superchargers were occupied when we got there – with one of the cars already fully charged.

Stopping for a chat with the store manager we found that Teslas practically sell themselves in Denmark. "Usually I say I'm just here for entertainment", manager Mikkel told us, with huge tax breaks making the electric Model S much more affordable than petrol and diesel rivals. Thinking that we had enough charge to make it to the Loddekopinge Supercharger in southern Sweden we set off again.

173 miles from our last charge and with around 40 miles left, we fed the car again, as photographer Johnny got his cleaning kit out to return the car to its original white hue. Another 94 miles later we charged the Model S for the last time for the day, before heading into the hills to our accommodation for the night east of Gothenburg. As the road climbed we saw the first snow of the trip, with our winter tyres coming good on the icy surface.

Pulling into a small driveway at 11:20pm, we'd were greeted with a cosy little hut in a local family's garden – our home for the night. Cosy apart from the walk through the snow to get to the bathroom in the house basement.
Tags
Read Full Story Click here to comment