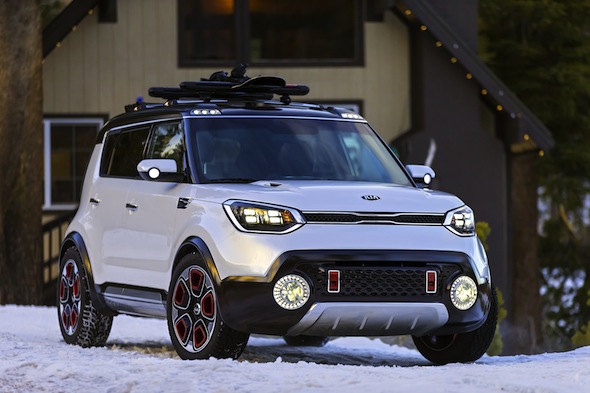 Kia has lifted the covers off a new crossover concept, called Trail'ster, ahead of its debut at this week's Chicago motor show.
Based on the recently launched Kia Soul, this new compact SUV design study is aimed 'lifestyle' buyers who require additional off-road ability but who don't want to upgrade to a full-size 4x4.

Under the bonnet is a petrol-hybrid powertrain consisting of a 185bhp 1.6-litre turbocharged petrol motor that powers the front wheels, and a 35bhp electric motor powering the rears.

However, unlike the majority of hybrids, which are geared towards economy, the Trail'ster's electric motor has been fitted solely to make it four-wheel-drive. Its pure electric driving range is limited to less than three miles.

Kia unveils Trail'ster concept
Up Next


The Trail'ster is the latest crossover model to get serious off-roading aspirations, and will rival the likes of the new Jeep Renegade, should it be given the green light for production. As such, the model gets a raised ride height, protective bodywork cladding and an aluminium front bash plate to protect it in the rough stuff. There's also a full-length electrically retractable canvas roof.

Tom Kearns, chief designer at Kia America, said: "The Trail'ster concept is a near-future look at how the production Kia Soul would logically evolve into an AWD-capable version that's built to escape the city streets and roam into the mountain wilderness.

"It takes the go-anywhere capability of an SUV and reimagines it within a compact and sporty package with an expressive design to match."

Whether the Trail'ster will make it into showrooms is yet to be confirmed. Further details are due to be released after the car's debut in Chicago.
Tags
Read Full Story Click here to comment

The winners and losers from Sunak’s Spending Review