Drunk man falls under moving train in Manchester - and survives 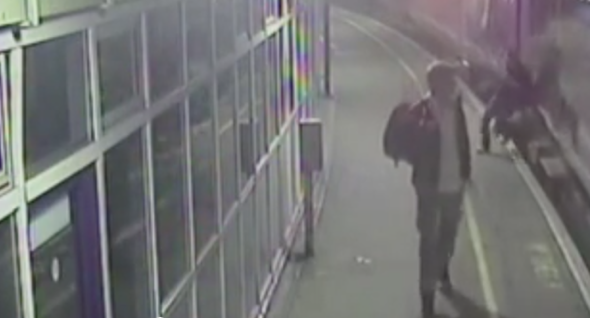 The moment a man fell headfirst under a train in Manchester was caught on camera - and has now been released by Network Rail to spearhead its new safety campaign.

The inebriated man can be seen stumbling along the platform before he loses his balance and tumbles under a train as it starts to move at Manchester's Piccadilly Station.

A fellow passenger walking in front of him appears to have no idea about the terrifying events just behind him.

Network Rail has released the footage to highlight the importance of safety while getting on and off trains as part of their new campaign, Minding the Gap.

It says that over the past five years rail passengers have stepped on and off trains more than 15 billion times. While Britain has the safest railway in Europe, during this time 18 people have lost their lives and almost 7,000 injuries have occurred following falls from the platform, or while boarding and alighting trains.

With passenger numbers increasing year on year, companies across the rail industry have worked to look up to 30 years ahead to identify and reduce any further risks to safety and published a joint long-term strategy.

It aims to make the transition between the train and the platform safer.

The gap between the train and the platform is designed to be practical. It must both be large enough to provide sufficient space for a variety of different train types to run safely and practicably without creating a physical obstruction but also be small enough to allow people to get on and off quickly and safely.

The gap cannot be closed nor can it ever be exactly the same at all Britain's 2,500 stations, as they were built at different times by different historic railway companies.

There are a number of factors which contribute to accidents between the platform and trains and analysis shows:

Intoxication: More men are involved in alcohol-related incidents than women, with nine per cent of all incidents involving intoxication.

Gender: More females than males (around 65 per cent) are involved in accidents alighting or boarding trains. Footwear could be one reason for this difference. It is also possible that females are more likely to report this type of incident.

Location: Getting off a the train is more hazardous than boarding.

Seasonality: Whilst wet weather increases the number of incidents, there is a higher accident rate in summer than any other time of year (possibly owing to increased proportion of leisure travellers who are not frequent rail users and are therefore less familiar with the risks).

Neal Lawson, director of operations and maintenance services at Network Rail, said: "Everybody has heard the phrase 'Mind the Gap'. We're minding that gap every day, looking at how we can make that gap as safe as possible for the millions that rely on a safe and punctual train service."

As part of the strategy, a public awareness campaign, backed by the rail industry including Network Rail and train operators, has been launched in stations across Britain. Called Lend a Helping Hand, it uses quirky verse to encourage people to be more considerate of their fellow passengers.

Drunk man falls under moving train in Manchester - and survives
This Edwardian station was built in the early 1900s and is operated by East Midlands Trains. 59 per cent of people surveyed said they were satisfied with the station - a low score which ranked it bottom for both cleanliness and facilities in the Passenger Focus National Passenger survey.

Dramatic rescue as woman falls under train in Birmingham

Drunk man falls under moving train in Manchester - and survives