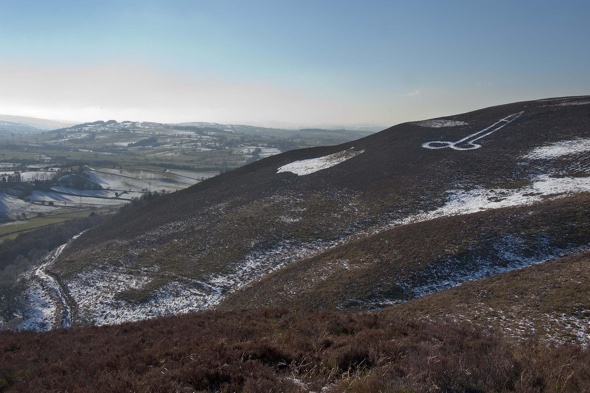 A giant 100ft penis has appeared on a mountain in Wales - and is quickly becoming a tourist attraction after going viral on social media.

The phallic symbol has appeared on the Clwydian Hills at Llandegla, and has left locals slightly bemused, as well as amused.

According to the Mirror, tractors are often used to cut tracks out of the bracken to help wildlife in what is a designated Area of Outstanding Natural Beauty.

The farmers create a patchwork scenery often appreciated by walkers that follow the 177-mile Offa's Dyke footpath from Presatyn to the Severn Estuary every year.

But they've been left baffled by the recent addition the landscape.

Speaking to the Daily Post, one farmer said: "It's very artistic and it is very clever, but it is not the sort of thing that I would like to cut out of the mountain for all to see.

"I don't know if someone has done it as a joke or whether it was accidental.

"But it looks like the real thing from down below."

Of course, pictures of the penis have hit Twitter.

VIDEO: There's something rather strange on the Clwydian Hills at Llandegla! http://t.co/sTuIwIbd8Rpic.twitter.com/d8qJuc4jQd

People have been amused by a giant phallic symbol on the side of a Llandegla mountain. http://t.co/aI46GIEWNDpic.twitter.com/jcCrq4GISx

At the Mountain Bike Centre in Llandegla, which is opposite the symbol, owner Ian Owen said it had been pointed out to him by a neighbour who took a photo of it and put it on Twitter.

According to the Metro, he said: "It's created quite a lot of interest. I saw it as I was leaving work. It think it's excellent, quite funny.

"It's good for Llandegla to be famous for something.

"It is putting us on the map like the large chalk man and chalk horse on the mountains in Dorset and Warwickshire."

Photographer Andrew Price said he was quite shocked to see it while driving from Ruthin to Wrexham, adding: "There it was, very large for all to see, It must be about 100 feet high.

"They tell me it is becoming something of a local tourist attraction."

Giant penis appears on mountain in Wales
Named an American Water Landmark by the American Water Works Association in 1975, the Ypsilanti Water Tower in Michigan is often joked about for its phallic shape and referred to as the 'brick dick' by locals. In 2003, it was even named the world's most phallic building by Cabinet magazine.
Remind you of anything? The San Onofre Nuclear Generating Station, known by locals as the Giant Nuclear Boobies, boasts a pair of perky domes. The 'nipples' of the plant's units glow red at night and the beach in front is popular among surfers and there is an unofficial stretch for nude bathers nearby.
Shaped like a penis, this 38-storey skyscraper in Barcelona may be compared to the phallus by many, but locals refer to Torre Agbar as 'el supositorio' (the suppository), a drug delivery system inserted into the rectum or vagina. Nice.
One of the buildings of the Asahi Breweries headquarters in Tokyo, the Asahi Beer Hall was designed by French designer Philippe Starck and is known for the Asahi Flame, the enormous golden structure on top which represents a frothy head or the 'burning heart of Asahi beer'. While it's often referred to as the 'golden turd,' we think it looks rather like a giant golden sperm.
Similar in style to Torre Agbar in Barcelona, London's Gherkin is a landmark in the capital and has been compared to the phallus, with nicknames including the Erotic Gherkin, Towering Innuendo and the Crystal Phallus. Bizarrely, it was also named the best uncircumcised building in the world by Cabinet magazine.
Designed by renowned architect Norman Foster for Richard Branson, Spaceport America appears as if it was modelled on a vagina. It's supposed to look like Virgin Galactic's brand logo of an eye with "an elongated pupil". The low-rise building is dug into the landscape in New Mexico and is entered through a cleft between two wings.
The People's Daily newspaper tower is so suggestive that the architect, Zhou Qui, was forced to speak out about its design, saying it is unmistakeably "phallic" but "when the scaffolding is taken down upon the completion of construction, people will stop seeing it as a phallic tower." Hmmm, we're not so sure!
A church is the last building you'd expect to be shaped like a penis and officials defending the suggestive design, saying: "We didn’t design it to be seen from above." Christian Science Dixon was "intentionally designed around a beautiful oak tree" to preserve it. But this didn't stop the internet from mocking it and the church soon joined in, joking on its Facebook page that a fig leaf was coming soon.

Zaha Hadid is famous for her bold, innovative architectural style but when her designs for the Al-Wakrah stadium in Qatar were revealed, critics compared it to female genitalia. Hadid hit back, saying they were "really embarrassing" for suggesting the stadium resembled a woman's private parts and insisted it was inspired by an ancient dhow boat.

When a giant inflatable Christmas tree was erected in Paris' Place Vendome earlier this year, it was instantly likened to a sex toy. The 80ft sculpture called Tree by American artist Paul McCarthy was soon vandalised after outraged Parisians called for city authorities to remove it but decided to take matters into their own hands.
Oakland’s Cathedral of Christ the Light has been compared to many things including a vagina. The cathedral cost a whopping $175 million and was designed by architect Craig W. Hartman who was inspired by a bishop's mitre and the miracle of the loaves and fishes in Christian tradition.
There's no denying that World Heritage Site Casa Mila is innovative and unique, but the chimneys on Antonio Gaudi's surrealist masterpiece are easily mistaken as phallic architecture at first glance. The bizarre yet beautiful sculptures are functional chimneys and vents.
The phallic-looking Listening Station at Teufelsberg in Berlin is made up of three huge bulbous globes: two perched on top of a building and one sitting six stories higher, creating a rather rude tower. It was used during the Cold War by the Americans and British to find out what was going on in Russian-controlled East Germany.
Ok, so you might need to tilt your head and squint a little with this one but apparently the top of Chicago's Smurfit-Stone Building looks like a vagina. Designer Sheldon Schlegman said he did not intend for the Vagina Building, as it is widely known, to look like a lady's private parts. This hasn't stopped the locals from believing that prominent vertical slit up the front of the Diamond Building was designed to counter the phallic skyscrapers surrounding it.
Up Next

New species of snake in Brazil looks like penis