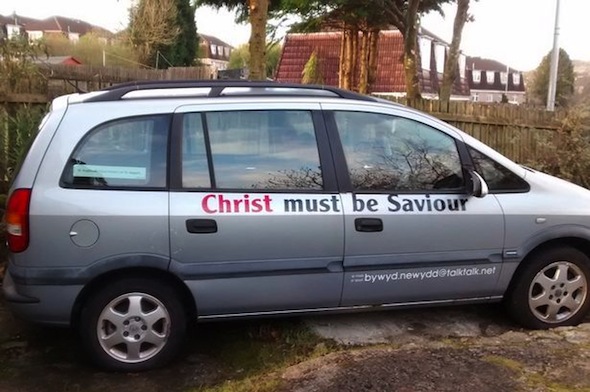 A vicar found herself in hot water with her car insurer, after adorning her people carrier with stickers bearing religious messages.
Rev Wena Parry paid £120 to have her Vauxhall Zafira people carrier decorated with "Christ must be Saviour" and "Christ for me" slogans.

"Every opportunity I have I want to tell people about Jesus. I reckon there must at least a million people who have read the texts on my car," she told BBC Wales.

However, the stickers saw Rev Parry threatened with having her policy voided, after she made a claim after thieves stole parts of the engine. The insurance company, Age UK, demanded to know why the stickers – deemed to be modifications – had not been declared.

Drivers are obliged to inform their insurer when altering their car from standard, though this normally applies to mechanical and electrical alterations such as alarm systems, larger wheels and performance enhancements.

Increasingly, however, car owners are finding their policies invalidated for more trivial reasons – most commonly for leaving their cars unlocked and unattended, for example when defrosting windscreens.

Rev Parry accused Age UK of religious discrimination. "There might be somebody within that company that hates Christianity," she said.

However, the company refuted the claim, telling The Independent: "The situation regarding Rev Parry's claim was in no way related to the Christian nature of her graphics.

"Our insurer concluded that our request to declare all modifications was not made clear enough to Rev Parry and therefore she did not know which vehicle enhancements should have been declared."

The company has now upheld Rev Parry's claim, settling at £735. It also waived the policy excess and outstanding balance as a gesture of goodwill.

Age UK's spokeswoman added: "While all car owners have the right to self-expression and place whatever they wish on their cars, we would urge all drivers to make their insurance providers aware of any graphics applied to their cars."
Tags
Read Full Story Click here to comment