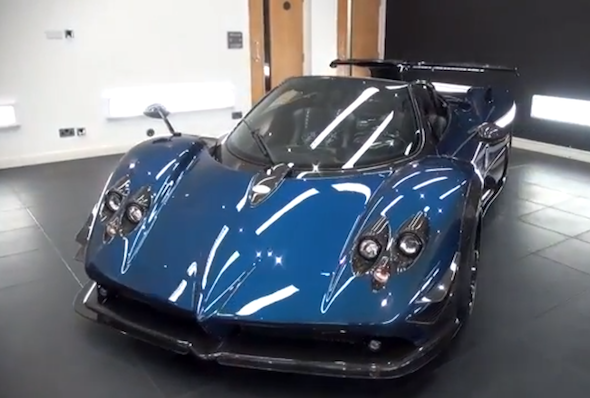 If you're put off by the brashness of a Lamborghini Aventador, or the 'nouveau riche' overtones of a Ferrari 458, there is one supercar maker whose products will mark you out as a connoisseur: Pagani.
A complete unknown until it launched the original Zonda back in 1999, Pagani has since become a respected member of the supercar fraternity, thanks to the exquisite engineering, show-stopping looks and savage speed of its cars.

While the Zonda has now officially been replaced by the new Huayra, significant demand for the old car – not least because of its screaming, naturally aspirated V12 engine – has seen a number of special editions leave the factory as one off commissions.

This latest one to emerge – a 760 Roadster – was spotted by supercar blogger Schmee150, at a London detailing shop, where it was having protective film applied before being shipped abroad to its new owner.

Such is the level of detail Pagani takes with these things, the company's founder, Horacio Pagani, even popped over to London to ensure everything was being handled properly.

Click play below and drink in the details of this glorious supercar up close.