On drug-driving patrol with the traffic cops 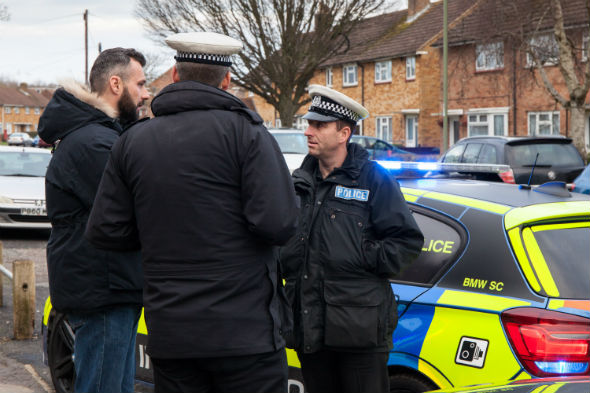 For what is effectively a family car, the Interceptor-emblazoned BMW 125d looks incredibly menacing just parked up in the car park of a Hampshire police station - let alone looming large in your rear view mirror.
With M Sport kit and bright blue paintwork it's hardly inconspicuous, but then that's the point. I'm here to spend the afternoon with the car's current custodian PC Jon Lansley for a look at how the police are enforcing drug-driving laws.

"The 1 Series is a test car for the force," he explains. "I really like it, but we don't get to keep it - we're just assessing it. It's great fun to drive and really quick - it doesn't move around at 150mph like the 3 Series."

The Interceptor might not be PC Lansley's to keep, but the drug-detecting kit he and his colleagues are putting to the test certainly are.

PC Lansley is one of seven highly-trained drug detection officers in the UK and he has been road testing the new kits that have just been given approval for use by the Home Office.

The mouth swabs - billed DrugWipe 3S - detect drivers who are under the influence of cocaine and cannabis in less than eight minutes at the side of the road.

"We tried several different types of screener kits and most of them work just like a pregnancy test, except it's not urine but saliva," explained PC Lansley.

In March, a new drug driving offence will come into force which will allow the authorities to prosecute offenders and punish them with up to six months in prison, a 12-month driving ban and fines of up to £5,000.

"The screeners work on a close-to-zero-tolerance policy," said PC Lansley. "The advice to drivers is simple and just as it is to drink drivers - if you don't want to get caught don't drink or take drugs before you get behind the wheel." 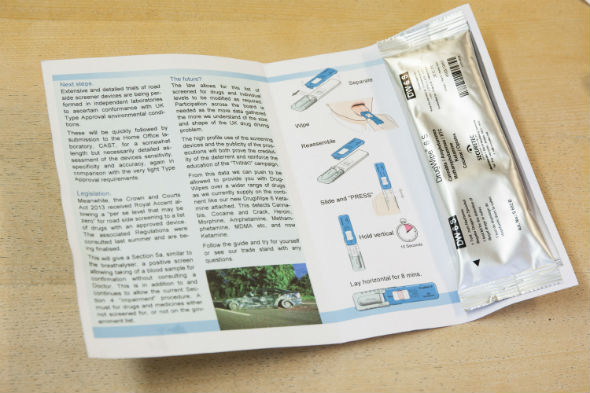 PUT TO THE TEST
Up until these new kits were introduced, drug drivers have been detected by officers using a Field Impairment Test, or FIT test for short, at the side of the road.

These are much like the sobriety tests you see on Police, Camera, Action from the States, and before we head out on patrol, PC Lansley puts me through one. It soon becomes clear why they work so well.

First my pupils are checked for dilation - a common indicator of drug use - then I'm made to tip my head back and count to 30 in my head and let the officer know when I think that time has elapsed. Even though I'm completely sober, I still overestimate by eight seconds.

I'm then made to walk along a white line, heel to toe, and turn tightly on the spot with my hands at my sides, then stand on one leg and count out loud before being told to touch my nose with outstretched arms with my eyes closed.

"These five tests are pretty easy to complete when you're sober, but when you're under the influence they're tough and it helps us identify offenders quickly," explained PC Lansley.

I try the tests again wearing goggles that simulate someone twice the legal limit, and PC Lansley's right – it's impossible to walk in a straight line. If I'd been driving in this state, I would have been arrested and taken to a police station where a doctor would perform a blood test.

ON PATROL
Up to speed on the drug-driving checks, we head out in the BMW "Interceptor" while my photographer colleague hitches a lift in an unmarked 3 Series. We're on the look-out for anyone committing a road traffic offence whom we can pull over and check for impairment.

PC Lansley said: "We can ask any driver who has committed a road traffic violation or who has been involved in a collision to complete a FIT test, drug screening or breathalyser."

PC Lansley, 39, has been with the force since 1997 - before that he was a lifeguard - and he started working with the traffic department in 2000. He's now a national drug detection instructor for other officers and even teaches American officers his trade.

"On an average shift of nine-10 hours I will pull over around 20-30 drivers - and at least one of those will be subjected to a FIT test," he explains.

On drug-driving patrol with the traffic cops
Up Next


COLLARED
We're in a side road on a housing estate near the police station on the hunt for traffic offenders when just literally five minutes after parking we catch a driver.

A white van man passes without his seatbelt on – enough for PC Lansley to fire up the blues and twos and pull him over.

The driver admits not wearing his belt and PC Lansley performs a FIT test and breathalyses him. He passes both and Sgt Lansley lets him go with just a warning.

"You'd be amazed at how many drivers still don't wear their seatbelt - that and mobile phone use are very common," he explains.

"My biggest pet hate, though, is cyclists riding without lights. I can stop them and give them a £50 ticket and I do. I ride a bike to work every day and know how unsafe not having lights is."

So does PC Lansley think the new drug-screening kits will make a big difference? "The current kits screen for three drugs and there are other kits that screen for more but they haven't been approved yet," he explains.

"Combined with the FIT tests and the knowledge we've picked up over the last few years they'll be a useful addition in cracking down on drug-driving for sure."

And anything that helps reduce the chances of fatalities on the road caused by under-the-influence drivers is a good thing in our book.

The police have also warned that cold and flu drugs are pushing drivers over limit.
Tags
Read Full Story Click here to comment