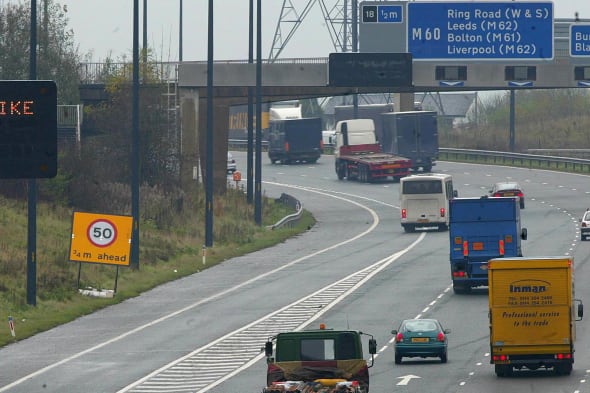 The latest generation of speed cameras fitted on the M25, are set be introduced along the M60, south of Manchester. The new speed cameras will be put up in 2017 after current road works on the M60 are due to be completed and are likely to catch out many drivers.
The new speed cameras will be painted grey, rather than the bright yellow currently used for most cameras, making them much more difficult to spot. When introduced on the M25 nearly 700 drivers were caught speeding by these cameras in just over two months.

Due to their grey colour the cameras have received criticism for being merely a money-making scheme rather than an attempt to reduce speeding.

Solicitor Nick Freeman told the Manchester Evening News that the new cameras are an added danger. "Instead of driving in a normal manner at a constant speed, motorists are behaving erratically because they are preoccupied with discovering what they are and where they are hidden.

"This is a huge distraction which is counterproductive to safe driving."

The cameras will be placed at the side of the road and there will be signs warning drivers about them, but not necessarily placed at the same point as their locations.

A Highways Agency spokesman said that there is no legal requirement that states that speed cameras have to be painted yellow and warning signs are the safest way to alert drivers to them.

The addition of these cameras on smart motorways such as the M60, where speeds can range between 40mph and 60mph during the day – and potentially even lower in the case of an accident – means that drivers have to keep a watchful eye on the variable speed limit shown, as the cameras will automatically adjust to the current speed limit.

Other motorways with plans to receive the 'stealth cameras' include M1, M3 and M6 in the next few years. Drivers caught speeding will face a fine of at least £100.