Teenager stops to help injured cop and realises it's her dad 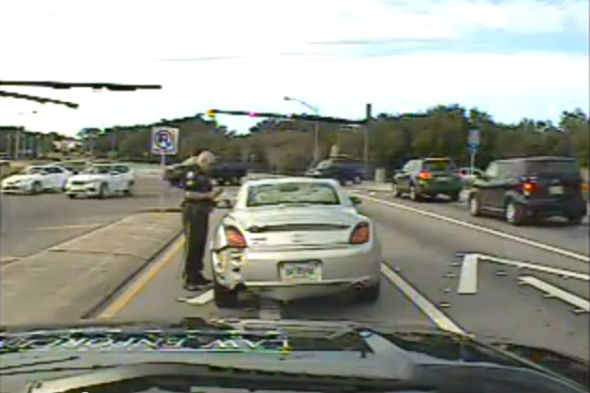 We don't envy US cops. When they're not dodging bullets from trigger-happy miscreants or trying to stop big rig-driving crims, they have to deal with the hordes of US drivers who evidently can't fathom out the difference between the accelerator and the brake – and those who think it's a good idea to drink and drive.
And it's drinking and driving that's to blame for the latest dash cam horror to come to light. A policeman in Florida made a routine traffic stop of a driver that he had spotted firing through a 35mph zone at 65mph. Noticing that the female driver was slurring her words and had just put the car in gear, Sergeant Kerstan Tatro went to grab the keys, at which point the woman floored the throttle – with the officer's arm still trapped in the car – which broke his arm and threw him to the ground.

Seeing the incident, a number of drivers pulled over to help the cop while others tore after the runaway driver. Most dramatic of all though, is that one of those who ran to Tatro's aid was his teenage daughter, who had to be consoled by some of the amassed motorists.

According to Sun Motors the driver was later traced and arrested and is due to face drug-driving related charges later in January.