Honda NSX: this is it 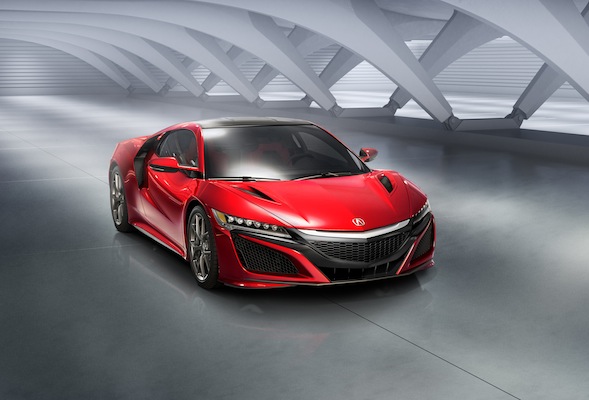 If there's one car company that could be diagnosed with schizophrenia, it would have to be Honda. Despite some flashes of genius in the form of the old NSX supercar and the practical but wacky Civic Tourer estate, this is the company that produces the dreary Insight hybrid along with hedge trimmers, snow blowers and outboard motors.
Honda could be about to reach new heights, however, with its replacement for the iconic NSX, which has just been unveiled at this week's Detroit motor show under Honda's US luxury brand, Acura.

Replacing the original model which landed on roads around the world way back in 1989, the new car, which is to be developed and produced in the USA, will feature a potent twin-turbocharged engine and sharp new styling.

Order books for this all-wheel-drive, mid-engined supercar open in the summer, with the first customer deliveries expected to start towards the end of the year. The twin-turbocharged V6 motor will be mated to a nine-speed dual clutch transmission and a performance-focused hybrid system, all housed within a lightweight carbon-fibre and aluminium body.

Honda NSX: this is it
Up Next


Designed to be a 'human-centred supercar', Honda is claiming that its new model will put the driver first and "represents the ideal blending of exotic sports car form and supercar function", says exterior design project leader, Michelle Christensen. The machine will boast 19-inch front and 20-inch rear wheels wrapped around over-sized carbon-ceramic brakes, while drivers can choose between driving modes from electric-only for short distances to a full-bore launch control system.

Created over the last three years in Ohio, "the NSX reflects Acura's American roots and makes a powerful statement about the strong role being played by our North American operations in envisioning and building the future of Acura," said Erik Berkman, executive vice president of the Acura Business Planning Office.

With easy forward visibility, simple controls and supportive but comfortable seats, the NSX should remain one of the most usable supercars, while two turbochargers and the hybrid powertrain should add a healthy blend of power and economy. Could this really the supercar-of-all-trades?
Tags
Read Full Story Click here to comment

Lewis Hamilton: My heart was in my mouth before securing Russian pole position