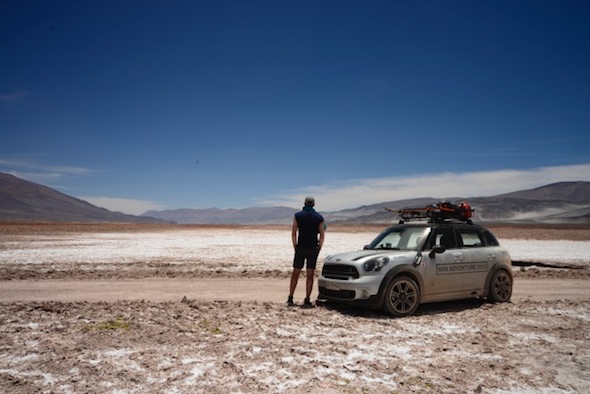 When (not if) the aliens finally invade, I know where I'm heading to set up base camp for the human race - here, in the Andes.
Today we've travelled from Antofagasta - some 3,600m above sea level - across a completely uncharted 256km stretch of mountain range. It's so vast, so barren, so empty of anything that should an all-conquering race of Xenomorphs ever arrive, it would simply be the last place they'd ever look for us.

Over breakfast of tea-bag-brewed coffee and stale bread and marmalade, our host for the night drew a biro line away from the already-rough charted roads we'd been travelling the day before on my map, zig-zagging a route across the Antofalla range, in north Catamarca.

I should have realised the waiter-cum-part-time-explorer's rough guide wasn't a good sign for what was to come. Fortunately my ignorance wasn't to last long.

"Today will either be your best day, or your worst," warned our adventure guide Eric Massiet du Biest. "Today is the most important to respect nature and the roads. If you go off track, you will die. We will not find you. Respect nature or she will take your life."

Ok, that sunk in. The Frenchman's briefings had been mixed in their delivery this week but today's was heartfelt and he had a worried look on his face. It was soon clear why.

Just five minutes from the town that had welcomed us with a party in the street the night before, the roads disintegrated. Soft, oft-driven-in sand turned to surprised-to-see-rubber rubble, sharp rocks, jagged ruts and wave after wave of lumpy, corrugated iron style surfaces that battered and bruised our MINI.

Our French guide had feared the route - eight hours off road and a trail even he bills as one of the best in the world - would be a car killer. It did its very best to live up to its reputation.

We clattered through huge gaping holes, thundered down dips that compressed our suspension to a bone-jarring crescendo, punching the air out of our lungs in the process. And we were the ones being careful.

Many of our fellow travellers weren't. We lost four more tyres today to the razor-sharp rocks. Our fellow Brits - AOL competition winners James and Mark - had a lucky escape when one of their tyres nearly succumbed to a battering. It escaped with just a bulge. For now.

MINI Road Trip Day Seven: The salt plains of the Andes
Up Next


This was our very own slice of the Dakar. Miles from civilisation, barren, empty and utterly beautiful. We reached the peak of our climb at 4,600m where even getting out of the car shortened breath, the edges of my vision blurring again with that now-familiar three-pints-in feeling.

That's the highest I've ever been without a propellor, but yet just a few feet from where I was trying to get my just-blown brain to take it all in was a little MINI Countryman. On standard road tyres. I still can't quite believe it took us.

The further we drove, the more surreal the scenery became. As we rose one crest, the most amazing view rolled into focus. All blink-because-you-can't-believe-it beautiful. In the distance, rolling Andes ridges stretched from east to west, below it a gigantic salt lake glittered, spread like a burst bag across the valley.

"That is the prettiest view I've ever seen," said one travel writer. A phrase I've heard a lot this week. Every day our expectations of what this world has hidden is readjusted that little bit further.

We picked our way down the mountain side and on to the salt flats; retina burning in intensity and impossibly hard to fathom. I had to resist tasting it.

We watched the plumes of dust from our colleagues' cars rise like jet plane vapour trails miles in the distance for a few minutes before heading deeper into the wilderness. After three hours - at a maximum of 40mph - the surfaces changed from white to blood-orange. The ripples becoming large waves like a BMX track, crushing our spines with every dip.

As we approached tonight's stop in Tolar Grande - still more than 3,000 metres above the sea - the marble mountains in the distance played optical illusions with my now air-deprived brain. Like an old Sega Mega Drive game where the background never moves but the road keeps rolling towards you, it played havoc with my senses.

We're coming towards the end of our epic tour now - tomorrow is the last day in the cars and the last in the Andes. As much as I want to get home, I'll be sorry to leave. Argentina is without doubt the most dramatic, glorious and friendly country I've ever visited - and I still can't quite believe a standard "soft-roader" has helped us tour it.