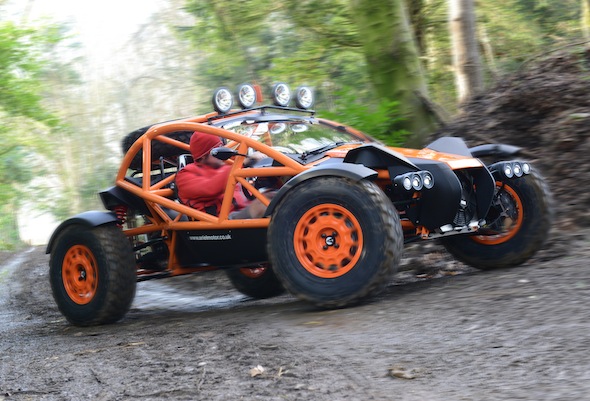 Tiny Somerset-based car outfit Ariel has become a household name (amongst car enthusiasts at least) largely for what its sole model, the Atom sports car, did to Jeremy Clarkson's face during his test on Top Gear. That video is below, in case you missed it.
Not content with producing what is possibly the most exciting track-day weapon currently available, Ariel is now hoping to continue the fun where the Tarmac stops, with its new Nomad off-road buggy.

First things first, this being an Ariel, don't expect Range Rover levels of luxury. The Nomad shares the Atom's unique setup, in which the chassis forms the body of the car. While this keeps weight to a minimum, it does leave passengers exposed to the elements somewhat.

Aside from having a much greater ride-height than the Atom, the Nomad's tubular steel structure extends over the driver to form a roll-cage, while there is the option of a spare tyre holder and roof lights, for the ultimate rally-raid experience.

Ariel heads off-road with 235bhp Nomad buggy
Up Next


While it may be styled to look like a remote control car, underneath the skin the Nomad packs some serious hardware. Mounted behind the driver is a 2.4-litre Honda VTEC engine, which has been tuned to produce 235bhp. And given that at 670kg, the Nomad is around half the weight of a Ford Focus, its performance stats are suitably bonkers. 60mph comes up in just 3.4 seconds and the car will top out at 136mph.

It'll do the business off-road, too, thanks to some seriously trick suspension and brakes, not to mention proper knobbly off-road tyres. There's even a version with FIA approved competition kit, just in case you fancy your chances on the Dakar Rally.

Want one? The Ariel Nomad starts from £30,000, though that'll rise quickly if you get too tick-happy with the extensive options list.