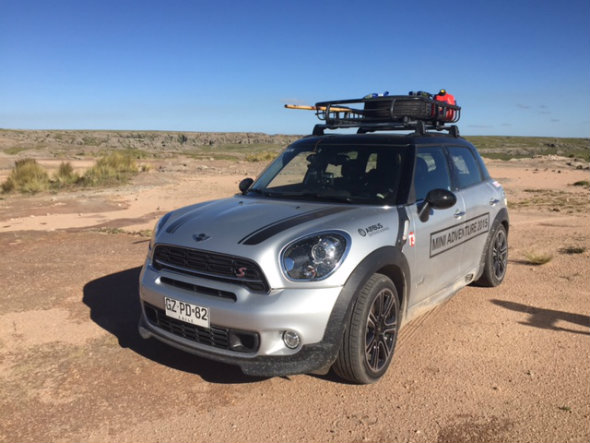 If you thought a MINI Countryman was some sort of soft-roader, think again. Yes, it might not have the go-anywhere capability of a Land Rover, but after some of the roads we've tackled in the high-riding urban runaround today, I'm beginning to think it would hold its own.
I'm writing this in the middle of nowhere - well, the middle of Argentina to be precise - sat next to my just-erected tent around 100 miles from Cordoba airport where we landed on an early morning flight from Buenos Aires.

Waiting for us in the car park were our steeds for the next week as we cross the wilds of South America on the trail of the Dakar Rally. The MINI Countryman Cooper S John Cooper Works may have the longest name in the history of motoring (allegedly), but they're coping pretty well so far.

As you may know, MINI is entering the grueling Dakar yet again this year with racers Nani Roma and Michel Perin looking to defend their title. However, I'm starting to fear we'll see very little of the rally and more of the epic scenery we've been treated to today.

We left the airport car park in convoluted convoy heading to a lunch stop on a ranch. After battling the morning traffic near the airport we quickly realised this sort of thing doesn't happen very often in Argentina.

We literally stopped traffic, which wasn't exactly handy when we were trying to battle our way through it. Men and women stared while smart phones captured our progress at every roundabout, stop sign or traffic lights. It was clear this was a very alien procession for the Argentinians.

MINI Road Trip Day Two: We collect our Countrymans
Up Next


Once we'd cleared the city limits, the roads snaked their way through stunning countryside. We fell in step behind a herd of bikers on powerful machines, whipping their way from S bend to S bend.

The little MINI loved it. These cars are stock from the factory, bar a few exterior modifications - like that huge roof rack and spare wheel strapped to it (no cans of foam here) - and great fun on the smooth black-top.

Things soon got a bit rougher though. First it was a rutted, dusty road to a lunch stop where we picked up the tents and some supplies for the trip, but then we turned off the main highway on to a rugged, muddy and rocky route.

This path wound its way around wild horses and huge herds of cattle and into some of the most glorious landscapes I've ever witnessed. A cross between the Highlands of Scotland and Welsh Valleys, our trail stretched for miles into these vistas, dipping and diving into the distance.

Progress was slow - through no fault of the car - but ours, as we continually stopped to commit landscape to iPhone memories - because it simply would have been a crime not to.

We've camped up in a rocky valley for the night and it's the group's first taste of the outdoor life. After battling with my tent and giving myself a head rush blowing up the camp bed, I'm just about ready for bed. But before then I need to work out what, if anything out here, constitutes the little boys' room...