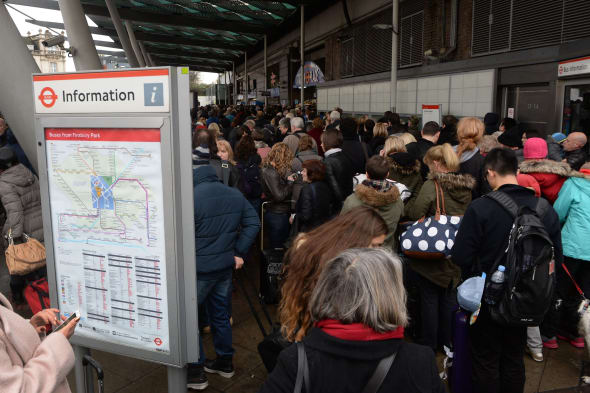 There have been more rail delays as the row over possible bonuses for Network Rail (NR) bosses rumbled on.

In East Anglia - where passengers have been plagued by problems over recent weeks - a broken-down train meant there was no service between Ipswich and Felixstowe, with buses having to operate in the morning rush-hour instead.

There were also hold-ups due to signalling problems between Bedford and Bletchley and between Selhurst, Norwood Junction and West Croydon in south London. Words: PA

Another south London problem in the shape of emergency engineering works between Clapham Junction and Earlsfield meant disruption to a number of services in and out of London's Waterloo station.

It was over-running Christmas engineering work at another major London terminus - King's Cross - that led to the station being shut on Saturday, sparking chaotic scenes there and at nearby Finsbury Park station.

The travel chaos has thrown the spotlight on NR's bonuses for top executives. The company has scrapped its long-term incentive plan for top bosses but still has in place an annual performance-related bonus for the chiefs.

Mr Carne is not entitled to the long-term incentive plan bonus for which 2014/15 is the last year.

NR's network operations managing director Robin Gisby, the man masterminding the Christmas engineering work programme, is also not getting the long-term bonus, which could have been as much as £371,000, as he is leaving the company at the end of February.

Whether the top directors get their bonuses for 2014/15 or not will be up to NR's remuneration committee.

There have been pleas in the past by politicians and by the Office of Rail Regulation (ORR) for the remuneration committee to take more heed of poor performance in their assessment of bonuses.

With NR's debt now officially on the Government's books there will be more pressure this year on the committee.

The ORR has launched an inquiry into the Saturday chaos. The ORR could, as it has in the past, fine NR for over-running festive engineering work.

However, critics of the whole rail set-up are quick to point out that with NR being a not-for-dividend company with no shareholders, any fine imposed on it is effectively paid by taxpayers.

The travel chaos at the weekend was merely the latest in a series of late-autumn, early-winter disruptions to services. Some have been down to the train companies, with a number of trains breaking down. But most have been due to signal failures which are down to NR.

On Friday, passengers' mid-winter misery will be compounded by the annual fare rise which will see season tickets going up by up to 2.5%.

Mr Carne has, reportedly, been on holiday in Cornwall over Christmas. An NR spokesman said that Mr Carne was "at work" today but it was unclear whether he was working from Cornwall or from NR's London headquarters.

Asked whether Mr Carne was working from his office in London, the NR spokesman said: "He is working in an office."

The spokesman went on: "He is at work. He has been working throughout, overseeing all the work and also the problems we have had."

More rail delays amid bonuses row
This Edwardian station was built in the early 1900s and is operated by East Midlands Trains. 59 per cent of people surveyed said they were satisfied with the station - a low score which ranked it bottom for both cleanliness and facilities in the Passenger Focus National Passenger survey.