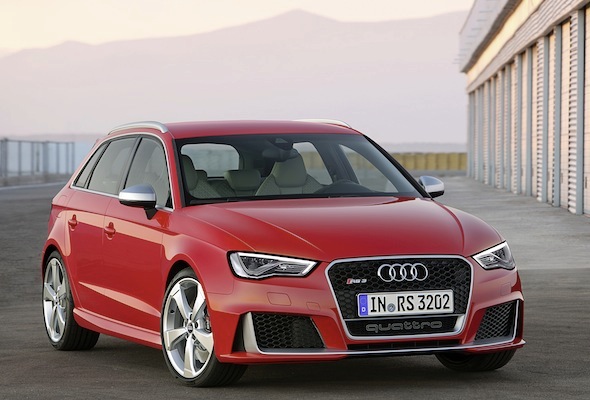 For years the German big three – Audi, BMW and Mercedes-Benz – have been locked in a horsepower war, with each attempting to outdo each other with ever more potent versions of their high-performance saloon cars. It seems this conflict has spilled over into the hot hatchback market, with premium performance models now boasting well in excess of 300bhp. Audi has just fired its latest salvo in the form of the 362bhp RS3 Sportback.
Due to make its public debut at the Geneva motor show in March, this latest hot Audi has been built to take the crown from the Mercedes-Benz A45 AMG as the most powerful and fastest production hatchback currently available.

Under the bonnet is a 2.5-litre, turbocharged, five-cylinder petrol engine, which is a reworked version of the motor used in the original, previous generation RS3. Being an RS model, it is fitted with Audi's Quattro four-wheel-drive system, with power being channelled through a seven-speed twin-clutch automatic gearbox – the only transmission option.

The 362bhp motor is mighty enough to eclipse its key rivals. The A45 AMG produces 355bhp, while the BMW M135i produces a relatively paltry 316bhp. Audi claims the new RS3 will sprint from 0-62mph in just 4.3 seconds, before running out of puff at 155mph (174mph if the derestricted top speed option is specified).

Audi reveals RS3 mega-hatch
Up Next


Underneath the beefed up styling is model-specific sports suspension, which can be optionally specified with magnetic dampers, which allows drivers to switch between comfort and handling-focused setups at the flick of a switch. Carbon ceramic brakes – usually the preserve of exotic sports cars – can also be ordered.

Although much lower and wider than the standard A3, the RS3's styling is somewhat restrained, save for the gargantuan twin tailpipes, lifted from the R8 V10 supercar. The bumpers have been redesigned for a more sporting look too, while at the back there is a rear diffuser, but that's your lot.

The cabin follows a similarly subtle theme, with most carried over from the regular A3. The usual Audi sporting accoutrements are present, however, including sports seats, aluminium finished pedals and a flat-bottomed steering wheel.

Price and specification details are yet to be confirmed, but expect the RS3 Sportback to cost around £40,000 when it reaches UK showrooms next spring.
Tags
Read Full Story