AOL Cars talks to Ken Block about his car history 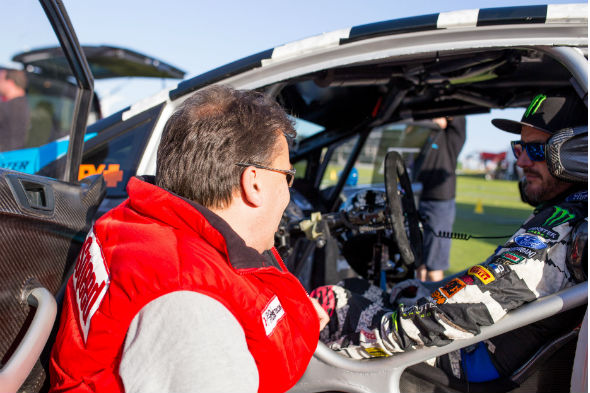 Part two of our interview with Ken Block sees Mr Hoonigan opening up about his motoring past, his favourite cars and why he really doesn't like Bentleys.
What was the first car you ever owned? Did it die a horrible death?

The first car I ever owned was a hand-me-down from my mother, it was a Toyota Tercel. It was just a horrible little economy car. It did survive though; I eventually got rid of it when I could afford to buy my own car.

How many attempts did it take you to pass your driving test?

Really? Are there any horrible stories from learning? Near misses?

No, I mean I watched and followed rallying as a kid so as soon as I could get my hands on my own keys to go drive, I wanted to slide and jump the car like I saw the rally driver do. So that influence of rally style driving for me started very young.

What was the first car you ever lusted after?

That's a good question, I would say it was a racecar, probably the Group B Audi Quattro that was in the 80s because that was when I was really paying attention to rallying and really loved it. And they started to bring those cars over to America to race Pikes Peak with huge wings and stuff and I just always loved racing and race cars and the Group B Quattro was just amazing to me.

What did your dad drive?

Well my dad drove a lot of Ford products, from Ford Station Wagons and trucks to Lincoln Town Cars. So I had a big Ford influence from my family when I was young and then later on he started to drive Jaguars. We had a Jaguar MKII in my family for a while but a lot of it from really early on was Ford products.

Can you talk us through your current car collection?

Most of what I own is racecars. My current daily driver is a Raptor, which is a Ford F150 truck that they produce at the factory. It's a good off-road truck, and I live up on the mountains so in the winter it's very fun...

No, not the Trax but you know in the winter the snow comes and you take the truck out and slide it around on the roads and in the summer there's plenty of off road country where I live so we spend a good amount of the summer, off-roading down in Moab or in various places down in southern Utah. It's a great vehicle because it's very durable and fun to drive. It's a truck that isn't meant just to carry stuff in the back, it's meant to go out and have fun with.

What's the worst motoring investment you've ever made?

I bought a Bentley Continental GT at one time (laughs) and I decided I really hate driving around in expensive cars; I like cars that are fun to drive.

So you're not a fan of prestige or luxury cars then?

Nahhh, I much prefer something that can go off-road or go in the dirt and not really care about. For me, its more fun to have a cheaper car that you can really abuse, as opposed to a supercar that you're always worried about scratching.

OK finally, what's the stupidest thing you've ever done in a car?

Crash...(laughs). No I mean literally as a race car driver you don't want to crash but you know these things happen, especially when you're trying to push your learning or push your skills, you know that sort of thing but it's inevitable that things are going to happen but really when I was younger, probably the dumbest thing that happened to me while driving a car was, there was a little bridge in a state park, if you went fast enough you could jump and a policeman saw me do it and arrested me for jumping my car.
Tags
Read Full Story Click here to comment