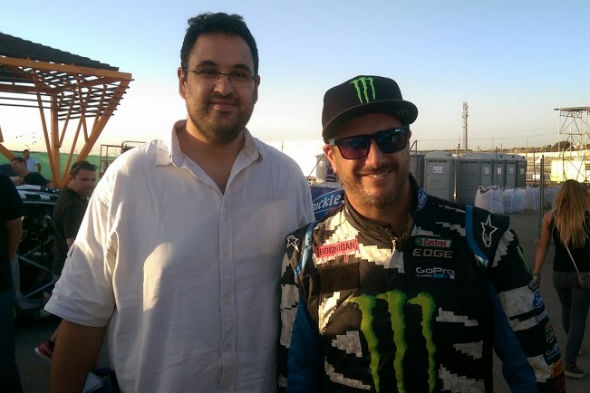 I'd like to state clearly, for the record: I DO NOT make a good passenger. Like most petrolheads, I enjoy the accelerative thrill of a silly-horsepower car, though that quickly fades when it's not my feet on the pedals, and is replaced with thoughts about how not to re-visit my breakfast, as a mad racing driver does his best to dislodge my lungs with G-forces alone.
All of which makes me the ideal person (in the eyes of the sadistic AOL Cars team at least) to take a passenger ride alongside Ken Block at the finale of his annual Gymkhana Grid series in central Spain. Brilliant...

Soaking up the sun in the countryside outside Madrid, our Ken is his usual smiling self as we catch up for a quick chat, and discuss the automotive spectacle he's brought to this dusty corner of Europe.

Now in its second year, the Gymkhana Grid series allows amateur drivers to hone their skills, and compete against the likes of Block and drift champion Vaughn Gittin Jnr, pulling shapes and smoking tyres as they navigate a course laid out on a tight concrete square. Room for error? Not here...

It's not the whitewash you might expect either – Block was knocked off the top-spot last year after a gearbox issue hurt his course time. This year he's wasting no time in getting in as much practice as possible, using passenger rides for the assembled media as a chance to get his eye in, and shave precious milliseconds off his lap time.

All too soon it's my turn. After squeezing myself through the steel spider's web that is the Fiesta's roll-cage, I'm eventually strapped in, with my head forced into a helmet seemingly two sizes too small. It's hot, claustrophobic, and once Ken fires up the Fiesta's un-silenced 2.0-litre Ecoboost motor, very very noisy.

AOL Cars rides with Ken Block
Up Next


Thankfully, thoughts of a violent fire-based death at the hands of a maniacally grinning Californian don't have time to circulate for too long – Block immediately gets the hammer down, and the car launches from its trap like a greyhound.

In full WRC spec, this highly modified Ford can crack the 0-60mph sprint in a scarcely believable 1.8 seconds. It's running at a mere 2.2 seconds today thanks to less grippy drift tyres, though it's still more than rapid enough to line up my organs against the seat back and quadruple the quantity of adrenaline surging around my system.

The rush quickly subsides as Block gets into his stride and makes it plainly obvious why he's the master of Gymkhana. He plays with the Fiesta as though it's a toy, making it dance in the most mesmerising way, flying around the course as if by instinct.

It's a humbling display of car control, though pretty soon the sight of the world going sideways is obscured by a cabin full of tyre smoke. No matter, Ken casually opens the door as he drives, allowing a cooling breeze to cut through the fog of vaporised Michelins.

All too soon the course is complete, and I'm left a gobsmacked, adrenaline-soaked mess. A glance to my left, though, sees Ken with that same grin plastered on his face – this was clearly a mere jolly before the heat of competition to follow.

Click play below to watch the video of him in action.