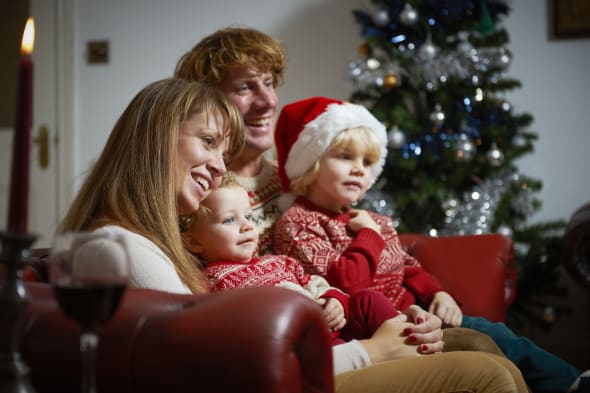 At this time of year, the TV becomes the most important thing in the house. In some homes there are regular shows to watch, and without them it wouldn't be Christmas. In others, without the television there's no way that the extended family would make it to lunch without a major falling out. But while your TV may seem worth its weight in gold at this time of year, it doesn't have to cost the earth, because there are ways to watch TV for less.

Sky
If you already subscribe to Sky, you'll have all the Christmas favourites, plus in the 'on demand' section. In the latter, there are a huge number of TV programmes and films you can watch whenever you like, for no extra cost. Alternatively you can rent individual films for around £2.50, and the cost will be added to your monthly bill.

Now TV
If you don't subscribe to Sky, then you could sign up for the things you want over the Christmas period. So if you have a house full of sports fans, you can get the Now TV Sports package for £10.99 a week, and if you want hundreds of films to choose from you can get the Now TV film package for £9.99 for the month. To watch on the TV you'll need certain smart TVs, or Apple TV, some games consoles and tablets - or you can buy the Now TV box for £9.99.

Virgin
If you have Virgin cable, you'll have more channels to choose from, and the ability to record them, but you can also rent films to watch (for around £3.50 for a new release). You can keep it for 48 hours after buying it - after which it will be deleted.
%VIRTUAL-ArticleSidebar-tech-stories%
BT TV
If you have BT broadband, you can get the extra channels on the basic TV service for nothing for the first 18 months (and then £5 a month after that). Some customers will also get BT Sport TV for free. You can then buy or rent movies through BT Box Office from £3.50.

Netflix
The combination of a ton of films, and box sets aplenty should keep anyone from talking to their relatives this year. To be able to watch it on TV you'll need to be able to stream it through a smart TV, A Virgin Tivo box, some blu ray players, a games console, Apple TV, Amazon Fire TV or Google Chrome cast. Alternatively you can watch it on a computer or tablet.

There aren't the new releases you'd get from Sky or Now TV, but if you're prepared to wait then Netflix has strength in depth. The best thing about this option is that you will get a month's free trial to use over Christmas, and then choose whether to pay £5.99 a month or cancel in January. If more than one of you wants to use it, you can sign up for up to four users at once for £8.99 a month.

Blinkbox
This is a pay-as-you-go service, so you can buy or rent movies, with new releases starting around £3.50. You have 30 days from the download to when you first watch the movie, and after it has started you can keep it for another 48 hours. Again you'll need to stream it in the same ways as Netflix.

Apple TV
It's another pay-as you-go service, where you can buy or rent movies through the iTunes store. These are a bit pricier, at around £4.50 for a new release.

Amazon Prime
If you're an Amazon Prime member (which costs £79 a year and many people choose primarily for free next day delivery) you'll get instant streaming of more than 15,000 titles. At the moment there's a free 30 day trial, which will take you though the festive period with a ton of on-demand films to save you from family arguments.

Netflix will raise prices: is it worth it?

Paid $1 million a year to play Call of Duty