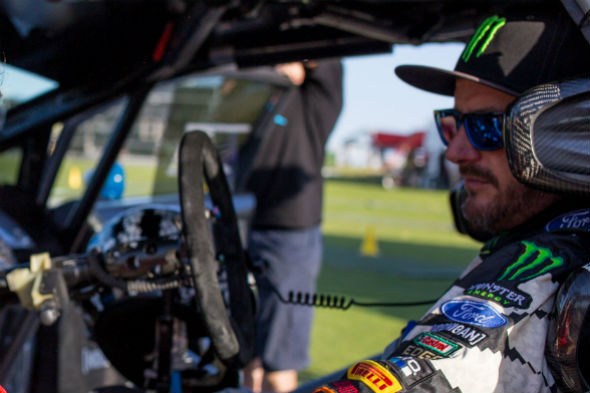 There are several ways to gain worldwide fame in motorsport: work your way up through the ranks of countless single-seater categories or traverse the world competing on far flung rally stages, or you could simply master the art of turning tyres into smoke, and filming it for eternal posterity on YouTube.
To be fair, that's a rather sweeping generalisation of how Ken Block has become a worldwide sensation. In a career spanning motocross racing, rallying and even being the founding member of DC Shoes, this towering Californian has become a household name, though for most he's known for his series of 'Gymkhana' videos.

They're an adrenaline-fuelled reboot of the classic autocross trial, though with some highly modified cars, and Block's skill behind the wheel, they're transformed into balletic displays of car control.

Now, the 47-year-old is branching out, by welcoming all-comers to take to the wheel at Gymkhana Grid. Now in its second year, the event has drawn talented drivers from across the world, with the promise of taking Block on at his own game. We caught up Ken at the finale in blazing sunshine of Madrid, to get the inside line.

Firstly talking about Gymkhana Grid, how does it differ from traditional autocross trials?

The thing that I always loved about Gymkhana was the fact that it was a grassroots motorsport, similar to autocross or whatever you want to call it but it was much more like rally driving, sliding the car and using the car in a much more rally type way. And for me coming from the States, our whole championship in this rally championship is on gravel stages. We don't have any tarmac places, so if I wanted to learn how to slide a rally car on the tarmac like they do in the WRC, I had to do it in something like Gymkhana. So that was really the biggest impetus for me to start doing Gymkhana in the first place.

Is that where you got the idea for your first videos?

Motorsport is notoriously expensive and difficult to break into - you're pitching this as a kind of grassroots level event. How accessible is this sport for amateurs and what advice would you give for anyone looking to get into Gymkhana?

Yeah compared to something like stage rallying, Gymkhana is much cheaper to run. You know obviously you still have to have a racecar that needs certain specifications but you know it's a lot cheaper and a lot easier to do than a lot of major motorsports. So it's a great way to get started and get experience and hopefully build your way up.

Do you have a particular trick for memorising the courses?

Yeah, my brain... I mean that in a joking way but I grew up racing motocross, riding motocross where you have to learn the track very fast especially the jumps, because if you forget what jump you're on and go too far or too short, you can hurt yourself quite badly. So for whatever reason I memorise tracks and courses and even stage roads like rally stage roads, I remember them all quite clearly and quite easily.


You famously used Imprezas for your first few videos, and you're now obviously in a Fiesta, what was the reason behind this?

I started of my race career in America racing with Subaru. I raced with them for nearly four years, but the thing is as my career started to expand my skills started to expand and I had to opportunity to race in the WRC. And Ford came along and made me a great offer to be a world driver, to be able to continue to race in the states and do what I wanted to do there but also race in the World Rally Championship. So it was just such a great partnership and a great way to expand what I was doing into the future, so it was a fairly easy decision to make that change over to Ford. And also to me, I enjoyed my years at Subaru but also I came from a Ford family, my dad drove Fords and it was quite a natural thing for me to switch over.

How much is this Gymkhana Fiesta worth and how many hours of work have gone into making it into what it is?

I have no idea (laughs). It's based on a WRC car that M Sport builds, so it started off basically as a WRC car and then it was modified to be able to race rallycross and do Gymkhana. The World Rally cars range anywhere from $400,000-$500,000 (£255,000-£319,000). And from that we have a bit more money invested in it because it's a 2-litre engine instead of a 1.6-litre and some of the parts have been beefed up to handle rallycross, so it's quite a unique car – a different car than a lot of other racecars around the world because it can do multiple disciplines.

How much power is it putting out?

In rallycross mode, it's putting out about 650bhp, in Gymkhana mode we actually put a smaller turbo on it and detune it some, so it has a bigger power band, so it's about 550bhp.

Obviously your cars are heavily modified from standard, what are the key modifications that someone looking to get into Gymkhana will have to do to get their car up to the standard?

The tyre and suspension set up is quite important, we use a bit of a softer set up for Gymkhana than I do for stage rallies or for rallycross so that the weight can transfer quite quickly and can start sliding quite easily. And the tyres are a drift tyre, which works very well on Tarmac to start and stop but it also has enough give so it will slide quite easily around some of the turns. If we try to use a WRC tyre, it's got too much grip. It's great for turning but we need to able to actually slide and be very quick and nimble.

The drivers are giving you a run for your money, is the level of competition enough to worry you at all?

Yeah absolutely, we have some great drivers here from Vaughn Gittin Jnr to Liam Doran; you know all these guys are quite good in the different disciplines they come from, from rallycross to drifting. So you know it really makes it quite tough. Actually in this event last year I got second. Nani Roma came in, he just had a good quick run and my car ended up having a slight malfunction with the shifting and that ended up costing me a few seconds and I ended up getting second overall instead of first, which was quite disappointing but it is what it is and its great to have that competition to push me and my team to be the best we can be.

What's next for you and the Gymkhana grid for 2015? What can we look forward to?

Well you know every year we try to continue to grow the sport, especially with Monster here in Europe. They've done a great job putting on different events around Europe so hopefully we can continue to do that and hopefully it continues to get more and more popular.
Tags
Read Full Story Click here to comment