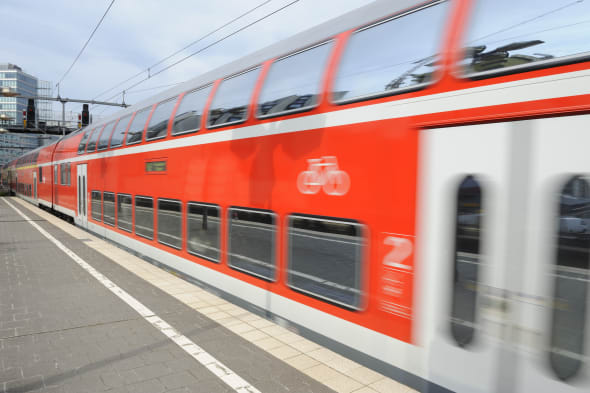 Double-decker trains could be introduced to Britain's railways to ease overcrowding on the busiest routes.

Network Rail has proposed a number of measures including the use of double-decker trains during busy periods between Southampton, Woking and London Waterloo.

'Flyovers' could also be built to allow trains to bypass busy stations and narrower seats are being considered to squeeze in more passengers.

According to The Sunday Times, Network Rail's proposals were unveiled in response to passenger numbers rocketing from 1.6 billion to 3.2 billion in the next 30 years.

A new double-decker train would need to be designed as it was decided none of the trains used abroad are suitable for Britain's higher platforms.

"It's right that as part of our plans to increase capacity we fully examine the costs and benefits of double-decker trains, alongside traditional engineering enhancements such as flyovers at Woking and Basingstoke and new platforms at Southampton," a Network Rail spokesman said.

The Daily Mail reports that government figures show nearly a quarter of morning peak trains into the capital are overcrowded, with six out of ten passengers left standing.

Last year it was reported that travelling first-class on the trains could become a thing of the past following calls to scrap the luxury carriages and replace them with more standard seating for commuters.

Research by the Daily Telegraph found that only half of first-class seats were occupied on trains arriving at mainline London stations, while standard class carriages were overcrowded and saw many passengers standing.

The survey looked at trains arriving at Paddington, Liverpool Street, Kings Cross and Waterloo between 8am and 9am on three consecutive weekdays.

Transport Secretary Patrick McLoughlin said: "It is sensible to think about the mix of first and standard-class carriages on our railways and it is something we are looking into.

"Equally, it is important to be absolutely clear that it is not a solution to the serious capacity issues we face."

Double-decker trains to beat overcrowding in Britain?
This Edwardian station was built in the early 1900s and is operated by East Midlands Trains. 59 per cent of people surveyed said they were satisfied with the station - a low score which ranked it bottom for both cleanliness and facilities in the Passenger Focus National Passenger survey.

Rail union to stage protests over 'upstairs-downstairs' service on trains