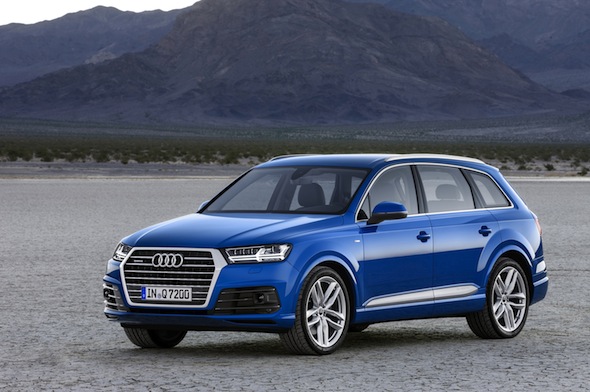 This is the new Audi Q7, which has been shown for the first time, ahead of its public debut at the Detroit motor show in January.
Set to go on sale in the UK in the spring, this flagship SUV has undergone a substantial re-design, with the new model gaining a less bloated, estate car-like aesthetic.

It's slimmer under the skin, too; Audi claims up to 325kg has been shed – dropping the kerb weight to around 1,995kg – which should have positive implications for the car's fuel economy, ride and handling.


This weight-loss regime is largely down to the Q7's new platform, which is made up of 41 per cent aluminium, and is shared with the model's sister cars, the Volkswagen Touareg and Porsche Cayenne.

Buyers will have just the one engine option at launch: a 3.0-litre V6 turbodiesel developing 268bhp. If offers a credible blend of economy and performance, sipping fuel at a rate of 47.8mpg, and able to reach 62mph from a standstill in a rapid 6.3 seconds.

A lower-powered 215bhp version of that engine will also be offered later in 2015, along with a plug-in hybrid unit. An eight speed automatic gearbox is fitted as standard, along with Audi's Quattro four-wheel-drive system.

Price and specification details are yet to be confirmed, though the Q7 is expected to cost from around £45,000 when order books open in the spring. First deliveries are expected in the summer.
Tags
Read Full Story