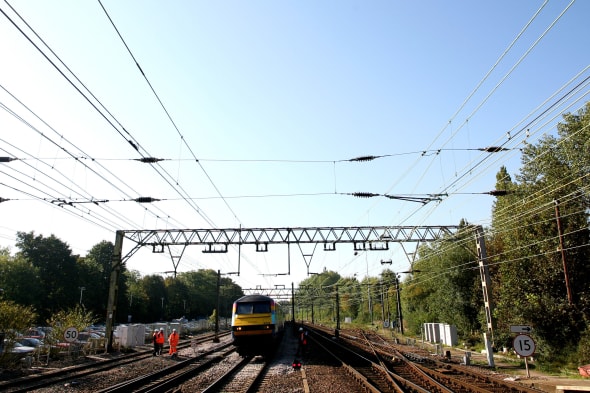 A man dressed in a chicken outfit appeared at an Essex railway station this morning to protest over rail delays in East Anglia.

Rush-hour rail commuters who have fallen "fowl" of delays to services in East Anglia were greeted by the man the feathered outfit handing out protest leaflets.

The demonstrator appeared at Shenfield station in Essex alongside a placard asking: "Are you fed up with Greater Anglia too?"

His appearance coincided with another morning of hold-ups on Greater Anglia services which are run by transport company Abellio. Words: PA

Today's problem was due to a signal failure in Essex which led to delays to journeys in and out of London's Liverpool Street station. Buses replaced trains between Southminster and Wickford.

On Twitter, passengers vented their frustration. Sophie Donn said: "I'm currently waiting for the 8:07 to Liverpool St, but there's been faults to & from London for the past three weeks. It's really not on now."

Cheryl Sugarman said: "Greater Anglia. Your greatest insult after this week is ticket inspectors today. Way to say that we are nothing more to you than scum."

Loz Blake said: "Every train I've taken to work for two weeks now has been delayed, some have been major, will you guys ever sort this out?"

There were also delays to rush-hour Tube services due to a signal problem which caused hold-ups on the District and Circle lines.

Mick Cash, general secretary of the RMT union, said: "This week we have seen a spate of breakdowns and failures on rail and Tube which have shone a light on the fact that our transport services are constantly running on the edge due to years of staffing and maintenance cuts.

"As the winter rolls on we can expect the situation to worsen if the cuts aren't reversed and reversed swiftly."

He went on: "Passengers paying through the nose to travel on overcrowded and failing services are right to be angry. But they should target that anger at the politicians and the operators, not at our members who are working in impossible conditions."

Meanwhile, in news that will come as little surprise to rail travellers, the Office of Rail Regulation said the number of passenger journeys on franchised rail services reached a record high in summer 2014.

There were 407.7 million passenger journeys between July and September this year - a 4.4% increase on the same period last year and the highest number of journeys recorded in a three-month period since data collection began in 2002-03.

The biggest summer 2014 rise, of 5.5%, was on regional trains. Journeys on London and south east England services rose 4.3% while long-distance journeys were up 3.5%.

Man in chicken outfit protests over rail delays
This Edwardian station was built in the early 1900s and is operated by East Midlands Trains. 59 per cent of people surveyed said they were satisfied with the station - a low score which ranked it bottom for both cleanliness and facilities in the Passenger Focus National Passenger survey.

Trains delayed by injured men on tracks in Birmingham