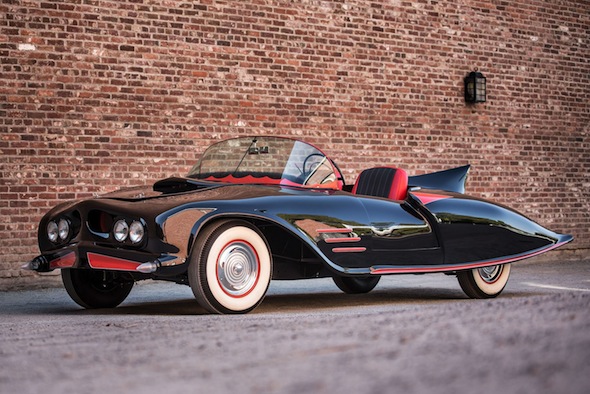 Classic cars are big business in the 21st century – especially if they have a celeb connection. And claims to fame don't come much bigger than being the first ever Batmobile.
Forget about the angular matte black monsters that are modern Batmobiles; this car is much more classy. With its lustrous black hue, red detailing, whitewall tyres and voluptuous curves, this machine is really rather special – though it does have some of the weirdest looking nostrils ever sported by a car...

Dubbed the world's first Batmobile, this car is now up for sale for a whopping £300,000, after being rescued from a field, where it had been languishing for the past 50 years. Built more than 50 years ago this Caped Crusader car is based upon a 1956 Oldsmobile 88 and took more than three years to complete, hitting the road two years ahead of the first TV Batmobile to appear in the 1960s.

Originally silver, this machine was later repainted black with red trim and received a huge rear fin, taking cues from the incredibly popular onscreen Batmobile. Later used by a DC Comics licensee the car was used to promote All Star Dairies ice cream, making a tour around the USA.

Falling out of favour in the late 1960s the car was given back to its original owner who sold it on for a mere $200. After this it was left to rust in a New Hampshire field, forgotten about until being rediscovered in 2008. Bought in 2013 by classic car specialists Toy Car Exchange, the original Batmobile underwent a meticulous restoration process. Completed earlier this year the car has now been listed for sale through Texas auctioneers Heritage and will be auctioned off in Dallas on December 6.

As the world's original Batmobile, experts predict that it could sell for up to $500,000 (more than £300,000). Director of entertainment and music at Heritage Auctions, Margaret Barrett said: "This Batmobile is the earliest DC-licensed Batmobile known to exist.

"It is from before replicas of the TV Batmobile were made and available for touring. Those were known as ABC TV Batmobiles, and later on as the Barris Batmobile or 1966 Batmobile."