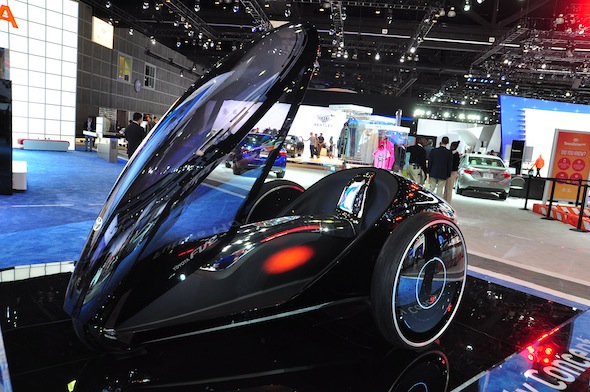 Last week we brought you our round-up of the hottest new metal on display at the LA motor show. Aside from providing an important insight into the future of the car industry, the show was also a chance for the assembled manufacturers to let their collective hair down, whether that be by showing off a striking concept car, or teasing at forthcoming projects. Below is our pick of the most attention-grabbing cars on show in the City of Angels.
Toyota Future Mobility

This concept-cum-cockroach wowed crowds in LA with its opening roof, tilting body and ability to display adverts on its flanks, with several graphical displays. What left onlookers most confused, though, was how you were supposed to drive the thing. It looks to us like you'd have to ride it like a horse, though one Toyota employee on the stand talked about standing up to drive it.

People carriers are often boring for drivers and young passengers alike. This Toyota, however, has put the emphasis firmly on entertaining children in the back – and multi-coloured – seats. Taking subterranean inspiration from SpongeBob Squarepants, this MPV boasts yellow and blue details – inside and out – and an oversized TV in the boot. The driver may struggle with the wheel nabbed straight from a ship, however, which completely obscures the dials.

VW may have been displaying a more sensible performance car in LA, in the form of the Golf R Estate, but it was also showing off this stunning GTi roadster. Making its US debut, the roadster is mooted to have 500bhp – courtesy of a 3.0-litre twin-turbocharged V6 motor – and be capable of 192mph. The hacked down windscreen, however, means that any encounters with errant flies at motorway speeds could be painful.

While Toyota and VW were putting forward cutting-edge machines, Rick Dore Kustoms have taken a step back 66 years with their latest hand built creation, which is based on a 1948 Jaguar frame and is reported to feature a 370bhp Ford V8 motor. Commissioned by Metallica frontman, James Hetfield, this curvaceous black machine is intended to blend the best of American custom car flair with European coachbuilding.

Toyota has whetted the appetite of driving enthusiasts with its lightweight GT86, but the FT-1 concept dramatically ups the ante, with its sleek lines, high-rise rear spoiler and 21-inch alloy wheels. Toyota claims that the FT-1 takes inspiration from the classic 200GT and the more modern Supra, Celica and GT86, though it hasn't revealed many details about this show car.

The other Italian supercar maker's latest creation, first unveiled in Geneva, hints at the company's next supercar. After introducing the sensible – for Masrerati – Quattroporte and Ghibli saloons, it's high time that the GranTurismo, which dates back to 2007, receives a thorough update. Names after one of the founding Maserati brothers, the Alfieri looks like a fitting replacement to us.

Also appearing in the US for the first time, was the Golf R 400, sandwiched between Golf R Estate and GTi roadster. This performance machine should up the R's horsepower count from its turbocharged 2.0-litre engine from 296bhp to around 400bhp with four-wheel drive, to keep the car in check. Acceleration should be vivid, should the R 400 make it to the road, with an anticipated sub-4.0 second nought to 60mph time.