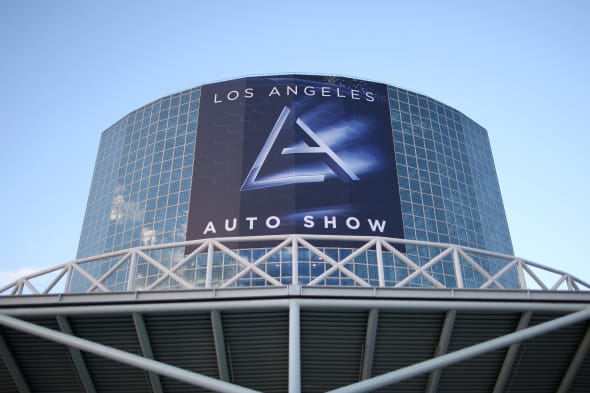 Motor shows may be home to their fair share of zany creations, but they also give an insight into the most exciting machines on the horizon. We're on the ground at the LA motor show this week, and we've battled our way through the gaudy tuner cars and ginormous SUVS to unearth the most interesting and exciting models on display. Here's our round-up of the top 10 cars of the show.
VW Golf R Estate

The VW Golf GTi may be hailed as the consummate all-rounder, but the Golf R Estate offers more of everything. With the standard Golf R's rorty 296bhp motor, unflappable four-wheel drive system and the Golf Estate's hefty boot, there is no occasion that the R Estate can't rise to. Surprisingly, the Golf Estate manages to pull off the R transformation visually as well. Despite the increase in weight over the hatchback, this Golf R can still sprint to 62mph in just 5.2 seconds and will return 40.4mpg. Order books open in spring with deliveries starting in the summer.

The latest model in Mazda's renaissance, the CX-3 is a stylish compact off-roader that slots below the popular CX-5 in the Japanese marque's range. Unlike many crossovers, the car will actually be available with all-wheel drive, though this is still a road-focussed machine. Engines include two 2.0-litre petrols and a 1.5-litre diesel – all of which boast Mazda's fuel-saving Skyactiv tech. With chic looks inside and out and the likelihood of strong economy judging on Mazda's other models, expect to see many CX-3s on the road in the near future.

Most Bentley convertibles are grand, but this one is grander than most. Featuring two-tone blue and silver paintwork, bold 21-inch alloy wheels, ivory leather with blue stitching and powerboat-style walnut decking on the convertible rear deck, the Grand Convertible certainly has presence; Bentley goes as far as to say that it is "the most sophisticated open-top car ever created by Bentley". Providing propulsion is Bentley's evergreen 6.75-litre V8 motor, this time boosted by two turbos and churning out a faintly ludicrous 530bhp and a tyre-melting 1,100Nm of pulling power. It's officially only a concept car for now, but expect to see a production version in the near future.

This two-tone Mustang harks back to the classic Shelby Mustang GT350 with its paintwork but brings the recipe bang up to date with a suitably brutal 5.2-litre V8 motor under the bonnet. Pumping out no less than 500bhp this Shelby is set to go on sale in limited numbers sometime in the second half of 2015.

Lexus has gone from designing staid American-friendly barges to sharp-suited Japanese technofests. And the latest creation from the company is the drop top LF-C2, which previews a convertible version of the RC coupe. Making its debut in LA in a lurid golden yellow, the LF-C2 successfully pulls off the transformation into a convertible, with sharp, well-proportioned lines. Expect it to share its underpinnings with the RC if it makes it into production.

Mercedes' Maybach sub-brand is to be resurrected in the form of a top-spec S-Class. Living up to its upmarket billing, this luxury machine packs a twin-turbocharged 6.0-litre V12 engine under the bonnet and a super-stretched wheelbase for a more luxurious rear-seat experience. Those in the plush individual rear seats can adjust their pews electrically for the most comfortable position.

The R8 may be on its last legs, but Audi is seeing it out in style with this new Competition edition, which features liberal lashings of carbon fibre and a muscular 562bhp V10 motor. Thanks to lightweight additions, this 5.2-litre monster devours the nought to 60mph in just 3.2 seconds and should hit 199mph. Just 60 of this diamond-quilted leather-lined Competition model will be made, with all being offered exclusively in the US.

With many upmarket bespoke creations featuring on luxury car companies' price lists, Porsche has decided to get in on the action, with its Panamera Exclusive Series – the first in a line of new Exclusive Series models. Helping to distinguish this Panamera from lesser versions, rear seat passengers get angled footrests, screens in the front headrests and luxurious soft leather upholstery. Just 100 examples will be sold worldwide, to ensure exclusivity.

With off-roaders on evermore car buyers' shopping lists, off-road estates are back on the agenda. Volvo's latest foray into four-wheel drive load-luggers, is the V60 Cross Country, which features a significant 65mm hike in ride height, the option of four-wheel drive and unique body styling for a tougher look than the standard V60 estate. Two front-wheel drive and one four-wheel drive model will be available. Order books open in the first quarter of 2015 with deliveries commening in June.

Audi designers have been accused of using the same template for all of their cars in the past, but this sleek beauty moves the game on and showcases the brand's future design direction. The large four-seater coupe is big, classy and plush. The pillarless windows reveal a stylish cabin and a chic, contoured dashboard. It may be a design exercise at the moment, but with a 597bhp 4.0-litre turbocharged engine, this 5.10m-long Audi can launch to 62mph in a scant 3.7 seconds, and is fitted with quattro four-wheel drive.
Tags
Read Full Story