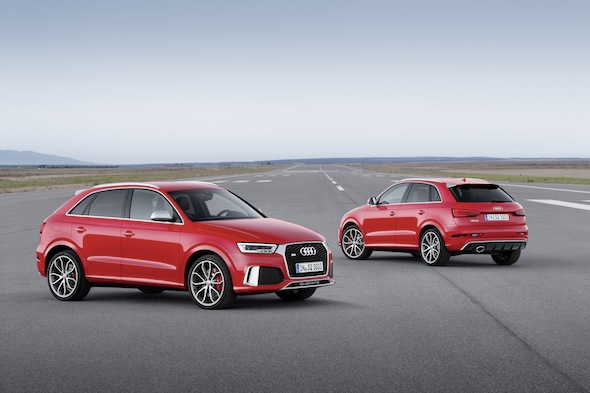 This is the new-look RS Q3 crossover – with a tweak in the design, and a bigger tweak under the bonnet. It'll be in the showrooms in the spring of next year.
What is it?

It's the flagship model of the new Q3 range, which was unveiled this week. There's a new honeycomb radiator grille with revised bumpers and new alloy wheels, but it's a freshening-up, not a major makeover. It has plenty of oomph, though, making it a high-performance compact SUV.

A five-cylinder TFSI turbocharged power unit giving 335bhp that takes the car from 0-60mph in about 4.8 seconds – almost half a second faster than the present model. It tops out at an electronically limited 155mph, and it gets there with ease – the acceleration is marvelous. The exhaust system has a switchable flap that adds even more volume if you want to impress (or wake up) the neighbours with the car's aggressive, offbeat soundtrack.

The full specification will be revealed nearer its January launch date, but the RS Q3 will have leather sports seats and a high-end infotainment system on a 6.5 inch colour display, with a 3.5inch driver's information system. It promises to have a high-standard spec over the standard Q3, so expect LED lights, parking assist front and rear and a top-class navigation system. And, of course, DAB radio, Bluetooth connectivity and voice control.

The Range Rover Evoque and the BMW X1 are obvious rivals, which means it's likely to be priced around £45,000 when details are confirmed. The RS Q3 competes with both those models in performance terms, although at 32.8mpg, it'll trail them both a touch in the economy stakes. The Mercedes GLA 45 AMG is also worth considering if you want a similarly savage performance punch, in a stylish compact off-roader package.

Fantastic! The interior looks sporty, and it has a performance to match. The acceleration feels immense – after all, this is a SUV with a standing start faster than some Porsches 911s. Once you're out on the open road, it just keep on going... and then going some more. Better yet, it doesn't fall apart when you get to a corner; Audi's iconic quattro four-wheel-drive system gives huge amounts of grip, giving drivers the confidence to push harder and harder. Ride quality too was impressive, albeit on the billiard-table smooth surfaces the Germans call Tarmac.

If you're looking for a car big enough to take the family out on a Sunday picnic and to drop the kids off at school, but then still have some fun when the occasion allows, this is perfect. It combines functionality with practicality with a hard performance edge. It is, quite simply, huge fun.